Inspiration for a New Generation of Conservationists

John Griffith and members of the California Conservation Corps pose with Ranger Rick.
You may recognize John Griffith from the video of his amazing dance moves that went viral in 2013. You may have heard of his BioBlitz Dance (or even been involved in creating one of your own.) But you may not know that all this is due in large part to our friend, Ranger Rick.

As we celebrate the members that make a difference across the nation for National Wildlife Week, I’m again reminded of how important it is to ensure we engage students to care about nature from a young age. The passion that John felt for wildlife and the outdoors as a child, cultivated by his family and Ranger Rick, is part of his everyday life and his job as crew leader at the California Conservation Corps, and he spreads that to the conservationists of tomorrow.

We asked John a few questions about conservation, including what the most important thing a young person interested in wildlife should do to get involved, and in true star fashion, his response was this great video: 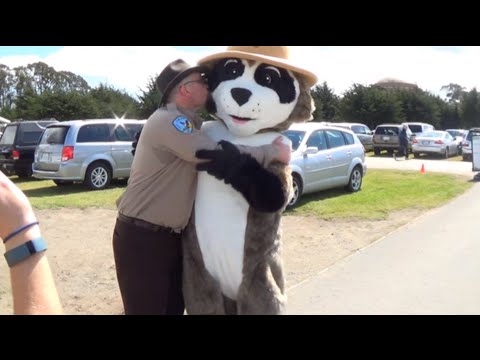 NWF: What does conservation mean to you?

John Griffith: To me, conservation means “caring” as much as it means “practicing common sense.” Just like wildlife, people are a part of nature: we breathe air; we drink water; we eat what grows up out of the soil. Our health is inseparably linked to the health of our land. We would be foolish to think or act otherwise. If we want our nation, and our descendants, to be prosperous into the future, we must manage our land with respect, compassion, and shared responsibility. Wildlife and their habitats must be treated with the same reverence.

Wildlife populations reflect how well we are managing the land that we share with them. If our activities cause animals and/or plants to become endangered, it means that we are not implementing enough—or the right kinds of—conservation practices. It indicates that we may be putting our own health at risk. Thanks to the efforts of organizations like the National Wildlife Federation, people are starting to understand that practicing “conservation” isn’t a hobby for people who like the outdoors, it is “solutionary action” necessary toward securing our own survival and the prosperity of future generations.

NWF: What does being a member of NWF mean to you?

JG: My parents and grandparents always provided opportunities for me to explore the outdoors—even if was just someone’s backyard garden or an urban park. But it was most definitely Ranger Rick Magazines that turned me into a conservationist. I remember when I was six or seven-years old that I read an article titled, “Mud Cat.” It was about catfish. I’ve been interested about what goes on in ponds and rivers ever since.  In fact, I’ve been doing fish surveys, fish habitat restoration, commercial and recreational fishing, and watershed health advocacy work throughout my adult life. I am grateful to NWF that I can trace back my lifetime of being a conservationist to Ranger Rick Magazine—and especially that one article that made me so curious about what happens below the pond’s surface.

(At left) Young John takes a raccoon to be weighed at a Wildlife Care Center. (At right) John shows his Ranger Rick pride.

While I’ve always supported NWF, I have become much more active since Beth Pratt-Bergstrom became the NWF California director. As our state’s director, she has worked to gather a diverse group of conservationists under “the NWF tent.” Her support of youth programs, urban wildlife issues, and diversity within the conservation movement has invigorated many of us to be even more enthusiastically supportive of NWF and its programs. Because of the efforts of stellar NWF employees like Beth, the NWF will remain one of the most relevant and effective conservation groups in the United States.

Help save and protect wildlife by becoming a member of NWF! Every dollar donated during the month of March will be doubled, so you can join and make twice the difference for wildlife.