Habitat Fragmentation Creates Hazards for Wildlife, Especially the Slow Ones

Of all the wildlife I saw on my recent trip to Costa Rica (go ahead, be a little jealous), my favorite by far was the sloth. Yes, the capuchin monkeys of Manuel Antonio were cute, and it’s true the tropical birds came in colors I never imagined, and oh boy did I see some really BIG spiders, yet nothing fascinated me quite like the sloths.

This guy was "hanging around" outside our hotel one evening.

For those who have never seen a sloth, let me warn you, they are incredibly cute. As hinted by their name, sloths are very slow, very cautious animals. While some consider them to be lethargic creatures (in fact, the name for sloth in Spanish, perezoso, literally means “lazy”), they are in fact one of the most well adapted species on the planet.

Everything about them – their frightening long claws, their slow to react reflexes, and the extra vertebrae in their neck – helps them thrive in their arboreal habitat.

Of course, what goes up must come down. In the case of sloths, the animals are forced to ground about once a week to relieve themselves or to move to another tree. Watching a sloth move on land is like, well, watching paint dry. As NatGeo explains:

“On land, sloths’ weak hind legs provide no power and their long claws are a hindrance. They must dig into the earth with their front claws and use their strong front legs to pull themselves along, dragging their bellies across the ground.” 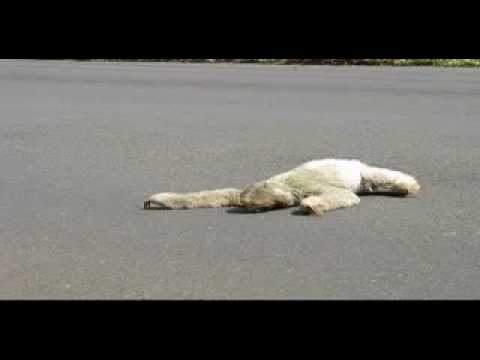 As I learned at the Sloth Sanctuary in Costa Rica, habitat fragmentation by roads and power lines is a threat to the country’s sloths. While the two species of sloth found in Costa Rica (Bradypus variegatus and Choloepus hoffmanni) are not classified as endangered, habitat loss has pushed other species like the jaguar to the brink of extinction.

A coyote crossing a road

In the U.S. it is not sloths and jaguars that suffer because of habitat fragmentation, but rather bears, deer, panthers, moose, salamanders and host of other species. The system of roads and highways in the U.S. often cuts directly through the network of paths wildlife use to access their basic survival needs.

When animals try to cross over a road to gain access to their essential feeding grounds, breeding areas, and shelter, it can be fatal to them and to the humans driving on the road. Making the problem worse is climate change, as even the slightest rise in average temperature can change an entire ecosystem–sometimes forcing wildlife species to move around to find habitat they like better.

To help wildlife find the pathways they need to migrate in latitude and elevation, NWF and partners have launched a program in Vermont called “Critical Paths for Wildlife.” The goals of the project include enhancing migration pathways, strengthening wildlife populations, and reducing animal-vehicle collisions. For anyone who has ever had a collision with wildlife (or even a near miss), it is easy to see how these types of programs are a “win-win” for people and wildlife.

After you read more about the Critical Paths (pdf) program and learn about the threats of habitat loss, check out NWF’s Certified Wildlife Habitat® program to find out how you create habitat for wildlife in your own yard!

Finally, if you want an overload of sloth cuteness, watch this video.