Wish They All Could Be California Squirrels…

2. Squirrel vs. Lamborghini: A squirrel that successfully dodged a Lamborghini traveling 100 mph on a California racetrack made CNN. That was one squirrel determined not to become roadkill.

3. This squirrel knew the way to San Jose: A yellow-bellied marmot (a large ground squirrel) hitched a ride from Yosemite and was seen near a storm drain in San Jose. Wildlife Center of Silicon Valley (WCSV) and WildRescue helped capture and transport the animal back home to Tuolumne Meadows. Check out this great video from WildRescue:

4. RoboSquirrel: Researchers at UC Davis are using robotic squirrels to study the interaction between squirrels and rattlesnakes. Apparently, squirrels are quite adept at evading snakes and RoboSquirrel might help scientists figure out why. As one researcher commented. “Squirrels have a remarkable ability to move out of the way of an oncoming snake strike,” he said. Even adult squirrels that do not seem to be aware of a snake will often successfully dodge a strike.” Can’t wait for RoboSquirrel the movie! 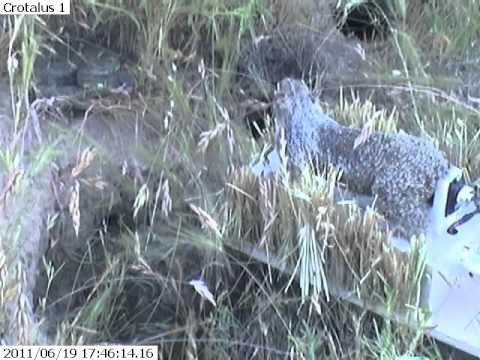 5. Squirrel Siesta: California squirrels know how to relax. During a record heat-wave in the state this summer this squirrel took a long daily siesta.