The Evolutionary Arms Race Between Rough-Skinned Newts and Garter Snakes

A note from NWF’s California Director Beth Pratt: California Conservation Corp crew members and their leader John Griffith have embraced NWF’s Certified Wildlife Habitat program and certified their Ukiah campus, with plans of doing more sites across California. I recently visited with the crew and became so impressed with their dedication to helping wildlife that I offered a guest spot on the Wildlife Promise blog if they would write about their experiences. The first story, about the quest for the Pacific giant salamander, will have you wanting to encounter one of these slimy but cool creatures. This second story in the series, written by Nick Aquirre, tells the fascinating story of a continuing battle between predator and prey.

After building salmon habitat restoration log structures on the Noyo River in Northern California, my fellow California Conservation Corps (CCC) crew members Allen and Jacob joined me on an adventure to explore upstream. Our mission was simple: discover something wild. While working our way up the river canyon, we passed by a few of last year’s CCC built salmon habitat structures. In a clear pool scoured by one such structure, a garter snake posed as if ready to strike the first fish that dared to swim passed. It immediately sensed our presence, but instead of swimming away, it slithered right toward us.

Jacob shouted, “Catch it! Let’s get a better look!”

One of the cold war critters: a garter snake. (Photo: CCC)

Allen gently caught the snake, saying, “This one is really brightly colored.” It was. It’s vividly orange and red sides and the yellow line along its back made it appear as if it were a slithering treasure made of tiny gems and gold. Earlier that day John Griffith, our supervisor—and hardcore nature lover/teacher—had found two other garter snakes that were in the path of our habitat construction and moved them to a safer location. Neither had been as fantastically colored as this one. At first I assumed that those snakes had been a different species than the one Allen now held, but then I remembered a class I’d attended at the Solar Living Institute on the wildlife of oak woodlands taught by one of Northern California’s premier naturalists, Kate Marianchild. She’d taught us about an evolutionary arms race between the California rough-skinned newt and the garter snake. Yes, an arms race!

Before I explain this cold war between the cold blooded, I’ll let you in on a few interesting facts about rough-skinned newts AKA Taricha granulosa. All four of the Taricha spp. newts that we have in California have a relationship with a type of bacteria in their bodies that makes the newts extremely toxic. This often referred to “poison” is actually a neurotoxin called tetrodotoxin (the same toxin that’s in puffer fish). Toxicity is not their only claim to coolness. These newts also have the ability to regenerate their limbs and some internal organs. Kate noted that in some special instances, rough skin newts have even re-grown parts of their own brain!

It gets even more interesting: the relationship between this amazing newt, and its only predator, has evolved into a race for existence. The garter snake has developed a unique adaptation to allow it to eat the highly toxic amphibian. Although not all Garter snakes can eat these newts, the ones that can, sequester the toxins from their prey in their liver, perhaps even making them toxic to their predators. These “toxic-immune” snakes are believed to be more brightly colored than the more toxic-susceptible members of their own species. Maybe this flamboyant coloration even warns the snake’s would-be predators that it, too, is toxic. Maybe that’s what we had discovered: a toxic-immune snake!

Since Kate’s class on the garter snake-newt arms race, every time I encounter either of these species, I wonder if any other of their wild neighbors is in on their arms race. Are there great blue herons out there becoming resistant to the newts’ tetrodotoxin from its diet of garter snakes? If so, will its feathers take on an even more spectacular hue of blue? Probably not, I mean, I can’t imagine those herons being any more beautiful.

I also can’t stop wondering what other evolutionary relationships I might discover while exploring our NWF wildlife certified CCC campus or at the places where we (the CCC) work.  If you would like to learn more about the wildlife that thrive in my habitat, check out Kate Marianchild’s upcoming book Secrets of the Oak Woodlands: Plants and Animals among California’s Oaks, to be published by Heyday in the summer of 2014.

And, yes, of course we set our snake free to live on amongst the habitat structures we built; where it can brighten the clear pools with its brilliance and dine on its favorite toxic meal. 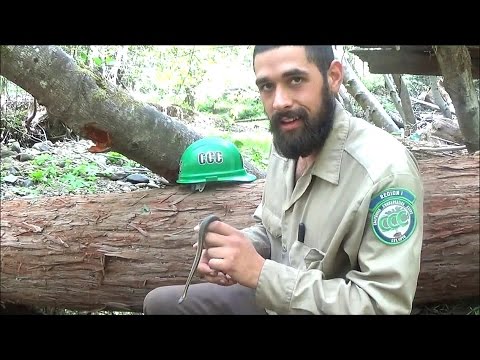 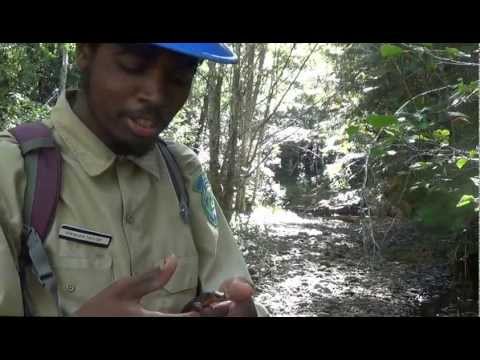 Want to make a difference for wildlife in your yard, schoolyard, church, business, neighborhood, or community? Check out the NWF Certified Wildlife Habitat® program website or Facebook page.