Have you seen the video that’s gone viral of tens of thousands of seals who pulled out off Cape Cod on Monomoy Island, part of Monomoy National Wildlife Refuge? Even the National Wildlife Federation’s veteran wildlife experts were blown away.

“What a fantastic reminder of how we share our coastline with beautiful animals like these,” says Curtis Fisher, regional executive director at the National Wildlife Federation’s Northeast Regional Center. “It’s also an amazing visual representation of how New England’s decades of work to restore wildlife and willingness to invest in protecting their habitat are paying off.” 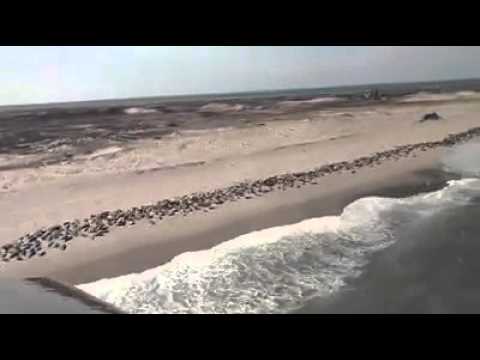 The numbers of harbor and gray seals on the U.S. NES LME have increased in recent years where some seals are present year-round (Figure 7.2), though they migrate within and outside of the NES. These seal populations eat a wide variety of fish and invertebrates, and despite controversy over consumption of Atlantic cod, they tend to primarily consume small pelagic fish, hakes and flatfish.

Other seal species such as the harp and hooded seals primarily use the region as a feeding ground during winter months. All of the above species found in the U.S. NES LME are protected under the Marine Mammal Protection Act, and all of the large whales (excluding minke whales) are listed as endangered under the Endangered Species Act (ESA). The North Atlantic right whale is one of the most endangered populations of large whales in the world.”

NWF’s Northeast Regional Center works to protect wildlife from seal and endangered North Atlantic right whales on the coast to moose and bobcats in our deep woods. Please make a generous donation today to help protect our wildlife, waters and forests!