Is Fred Singer Skeptical About Your Issue? How Much You Got?

If he’s such a heroic challenger of the scientific consensus, why don’t you hear S. Fred Singer denying there’s water on the moon? The short answer is, because there’s no money in it. 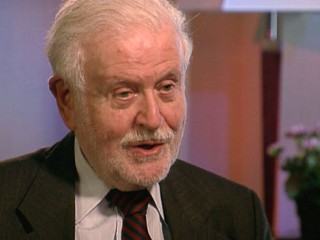 S. Fred will be speaking at today’s Flat Earth Society Meeting (Featuring Free Box Lunch!) on Capitol Hill sponsored by Big Oil. For decades now, Singer has been denying the scientific consensus around issues from cigarettes to acid rain to ozone depletion.

Chris Mooney detailed Singer’s work in his landmark book, The Republican War on Science. Here’s a scene with Singer testifying against the scientific consensus on ozone depletion:

Against this overwhelmingly accepted position, the Republicans pitted Dr. S. Fred Singer, of the Science and Environmental Policy Project (already on record as disputing the dangers of acid rain and other environmental problems), and Dr. Sallie Baliunas, a senior scientist with the George C. Marshall Institute. The two challenged the science the science that had been used to justify an accelerated phaseout of CFCs in 1992. “There is no scientific consensus on ozone depletion or its consequences,” Singer declared.

Mooney concludes, “Their blanket skepticism renders them unwilling to accept the current state of scientific understanding, no matter how solid.”

There’s a common thread on the issues Singer chooses to be vocal on — cigarettes, acid rain, ozone depletion, global warming: A strong industry financial motive to block government action. If industry starts cutting people huge checks to help it fight regulations and protect its own massive profits, you can bet that good ol’ S. Fred will suddenly become passionate about that issue.

But there’s a second common thread to Singer’s concerns: His cries of certain economic Armageddon if we act are inevitably proven wrong. Is our economy cripped today because we eliminated CFCs to stop ozone depletion? Are people sleeping in the streets because we limited acid rain pollution?

Now he’s warning us against clean energy & climate action. Tell your Senators to tune this Singer out.