I recently attended a very special event held by the Sea Turtle Conservancy (STC).  National Wildlife Federation has partnered with STC to support their work protecting sea turtles from the BP oil spill disaster.  Specifically, STC is involved in the excavation of sea turtle nests on the Gulf coasts of Florida and Alabama and the release of the hatchlings on Florida’s Atlantic coast, far from the oil.

STC also has a program called Tour de Turtles where they attach transmitters to the shells of adult sea turtles and then monitor their movements via satellite.  The data gathered allow biologists and conservationists to determine the critical habitat of these animals and will help us assess the threats they face from the oil spill disaster.  The fun part is that the public can also watch the movements of all of the turtles in the program online.

Last week, I got to participate in STC’s Tour de Turtles event where a sea turtle named Hope was fitted with a transmitter after laying her eggs on the beach and then released back into the ocean. Here’s the video. 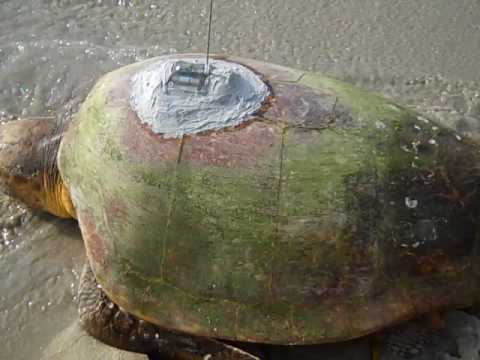 Garden Habitats, Get Outside, People and Wildlife, Wildlife Facts