Yes, that’s what the machines chewing through the Gulf Coast’s once-white beaches are called — Sand Sharks.

As the AP’s Jay Reeves reports, they’re an imperfect solution:

With its Macondo well dead and few visitors on the coast during the offseason, BP has launched its biggest push yet to deep-clean the tourist beaches that were coated with crude during the worst of the Gulf oil spill. Machines are digging down into the sand to remove buried tar mats left from the Deepwater Horizon disaster.

The work is getting mixed reviews. Many are anxious to see the beaches cleaned as quickly as possible by whatever means are available. Others say BP may be making matters worse by bringing heavy equipment onto beaches and spreading the petroleum stain.

Some fear fresh environmental damage from the work itself, which can kill tiny creatures that live in the sand. Even BP acknowledges that fresh tar balls are still hitting the coast, meaning some of the work might be premature. Still, local officials have given the company a Jan. 1 deadline to be done.

John Hammond, regional executive director of the National Wildlife Federation’s Southeast Regional Center, visited Alabama’s Orange Beach to get a first-hand look at the operation. Watch what he found: 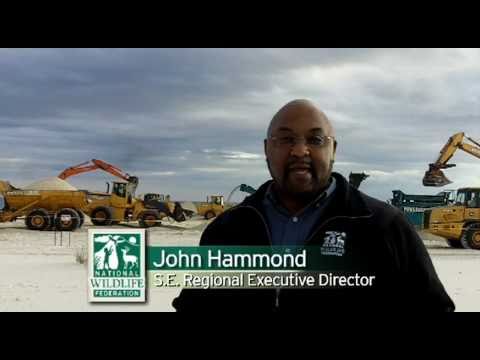