Three things you can count on at a big car show in Detroit: big engines, bright lights, and beautiful models.

What was really sexy, though, was taking a closer look at all the clean technology going into current and next generation automobiles that will slash greenhouse emissions and reduce our dependency on dirty fuels. 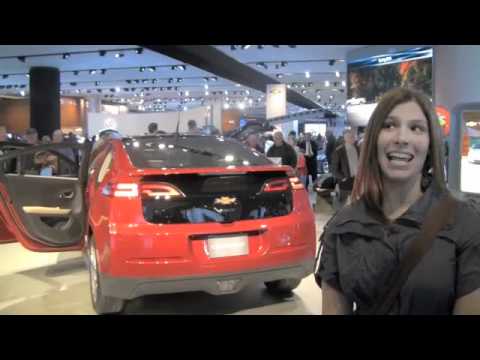 As our video shows, the award-winning Chevy Volt was drawing a ton of attention.  Already, there are over 56,000 people who’ve signed up to buy one! And as Walter McManus said at this morning’s “Driving Michigan Forward” panel, “there is no doubt, a commitment to clean car technology will drive innovation and profit for American automobile manufacturers.”  McManus, an economist at the University of Michigan’s Transportation Research Institute, has the data to support his optimism.

NWF members and staff are not alone in wanting big increases in efficiency either.  Mark Cooper, Research Director at the Consumer Federation of America, pointed out that for the U.S. to reach its stated goal of reducing greenhouse gas emissions 80% by 2050, “it’ll require a fleet average of 100 miles per gallon.” Cooper also endorsed the GO60MPG campaign goal for new cars to achieve at least 60 miles per gallon and no more than 143 grams per mile of carbon pollution by 2025.

Danielle’s Highlight: I’ve been to the auto show many times (even once I was able to attend the prestigious Gala!), but this year was particularly wonderful.  The auto companies have a much larger focus on fuel efficiency and more proudly compete with one another about MPGs.  I think the advanced autos are a key to Michigan’s economic turnaround, and today it started to look like we are driving forward.

Frank’s favorite moment at the auto show: getting behind the wheel of a Chevy Volt, which was selected as “Car of the Year” for 2011 – “it was really exciting to sit in the Volt , but probably nowhere near as cool as actually driving it every day – saving money and cutting emissions.  I’m on the wait list to buy one!

QUIZ: How Much Do You Know About Bees?

WildSTEM Partnership Elevates Equity and Inclusion in the Environmental Field

U.S. Colleges and Universities Are Making a Positive Impact on…