It’s that time of year again. I am sitting on my couch under my heaviest blanket with my third cup of coffee, stirred with a candy cane, after just having devoured another piece of pecan pie. As I feel my blood beginning to turn to sludge, I want to know: Is this annual urge to put on more layers inside and out just in my head, or is some deep internal programming telling me to, well, hibernate?

Of course, humans don’t actually hibernate: Our heart rates, breathing and metabolisms can’t automatically come to a crawl and our temperatures can’t drop causing us to go into long bouts of torpor to allow us to conserve energy. However, hibernation expert Hannah Carey at the University of Wisconsin-Madison says that inducing us into some form of decreased metabolic state might not be out of the realm of possibility someday.

Many mammals begin to decrease their appetites and shift from living off of carbohydrates to stored fat on some unknown cue in the fall. However, Carey and her colleagues have seen captive 13-lined Arctic ground squirrels do so on schedule in spite of being fed and kept in warm nesting boxes. The researchers think that the squirrels, and other hibernating mammals, must have some sort of hardwiring that puts them into storage mode.

“If we knew everything about how they did it, it’s possible that we could use that information to manipulate human metabolism or mimic other aspects of hibernation,” says Carey. “We could induce humans and other animals into a mild dormant state, which could, for example, limit damage of vital organs until accident victims can get medical aide.”

This and many other things we have recently discovered about several extreme nappers are squashing many old assumptions about hibernation being only a cold-climate defense tactic.

Here are some other surprising facts about 10 expert sleepers, some of which live in the tropics or deserts:

1. Dwarf lemurs and mouse lemurs in Madagascar are the only tropical primates known to hibernate. They can do so for months to accommodate periods in which resources become scarce. The fat-tailed dwarf lemur hibernates seven months out of the year in tree holes in Madagascar, where winter can be as warm as 86 degrees F. Its body temperature can fluctuate as much as 36 degrees daily to accommodate fluctuations in temperatures in its hole.

2. Black, brown and grizzly bears are the largest hibernators. Given their size, it actually takes a lot for them to power down and back up again, so while their heart rate drops from, say for black bears, an average of 55 beats at rest in the summer to as few as nine per minute during hibernation, their body temperature is only lowered a few degrees and ranges from 86 to 97 degrees F. Living off of five inches of stored fat for five to seven months while hibernating, they won’t eat, drink or urinate, in spite of waking up periodically and then again returning to hibernation. 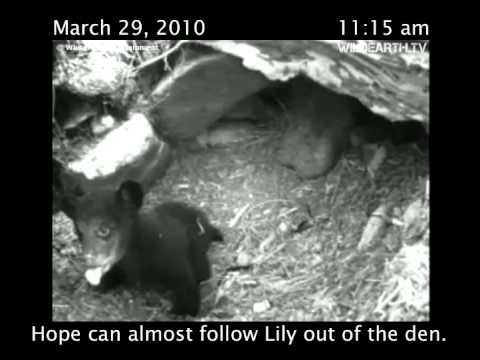 Check out these live bear cams and videos of black bears denning, some with cubs, at the North American Bear Center in Minnesota.

3. Bats drop their heart rates from hundreds of beats per minute to a low of about 25 beats per minute during hibernation. However, given their relatively small size, if bats are woken during winter when their insect meals cannot be found, they could easily use up their fat stores and starve.

4. Many North American rodents, from desert-dwelling kangaroo rats and rock squirrels to tiny forest-dwelling dormice, will go dormant for hours to days and then wake up to snack on stored foods to get by in cold months. (Watch these captivating videos of dormice from ARKive.)

5. But marmots, ground squirrels and jumping mice hibernate for weeks just off of accumulated body fat. In fact, the Arctic ground squirrel can hibernate for up to 250 days this way by lowering its body temperature down to nearly 27 degrees F—the lowest of animal known mammal.

6. The nightjar or common poorwill is quite uncommon actually, as it is the only bird known to be able to slow its metabolic rate and drop its body temperature for days or weeks when its food, night-flying insects, are not available. It lives in dry, open grassy or shrubby areas in western North America.

7. In winter, some amphibians and reptiles go into a state of brumation in which they are awake and although they will drink water, will not eat. North America’s only poisonous lizard, the gila monster, lives in deserts in parts of the southwestern United States and Mexico. This mostly nocturnal predator feasts on small mammals, birds, other lizards, frogs and eggs, and then lives months without food by storing fat in its tail and becoming dormant in its burrow.

8. Some reptiles will aestivate, or lower their own body temperature to protect themself against extreme heat, like the desert tortoise of the North American Southwest. It will aestivate in summer and then hibernate most of winter, from about October to March.

9. The pupfish lives in the deserts of southwestern North America. At the end of summer when shallow springs, ponds, marshes, and slow-flowing streams dry up, most pupfish will die, having lived less than a year. In some areas, by late summer, surviving pupfish will start to become dormant in burrows at the bottoms of remaining waters.

10. Many insects will pause at different stages in their development, or diapause, in winter but also when food or water might be limited in summer, like desert locusts.

Some researchers have noted that during the last 500 years, those species that spend some periods of time in torpor with lower heart rates are also less likely to go extinct, perhaps because they are able to adjust better to drastic changes in food availability or temperatures. This could be valuable information, as so many species are being affected by climate change.

Who knows what else we might learn from these expert sleepers? Perhaps that state of suspended animation we see in science fiction movies isn’t entirely out of reach. As Carey puts it, “We are very loyal to that 98.6 degrees Fahrenheit,” so I know I’ll be envying our hibernating brethren during the next winter months as I reach for my next cup of coffee.