I’m not sure when my passion for frogs began—as a child of the 70s I’m sure watching Kermit the Frog on the Muppet Show had something to do with my interest. My mother tells me my curiosity about frogs began at an early age. I would collect frogs in a bucket, name them all George, watch them in a special frog habitat I constructed in our backyard, then release them to their “families” at night. I don’t really know why I named them George.

A few years ago I added a backyard frog pond to my home outside Yosemite (Certified Wildlife Habitat™ of course!). Build it and they will come. Only a few weeks after I erected the pond, I encountered a western toad at dusk heading toward the water with his peculiar walk.

Now year after year in the spring, I listen to the distinct and loud “kreck-ek” of the Pacific Chorus Frogs day and night. Mary Dickerson, who authored The Frog Book in 1906, deemed the chorus frog the “entertaining little acrobat of the frog world” and described their song: “At dusk or on rainy days a loud resonant trill comes from the trees and vines. The sound has the charm of contentment in it; in fact it is much like the purring of a cat, only louder.”

And of course much to my delight I also have an annual birth of chorus frog tadpoles in my pond (I love the Honduras word for tadpole: “bunbulun”). Watching these little guys transform from egg, to tadpole, to frog each year is magical.

A Tour of My Backyard Frog Pond 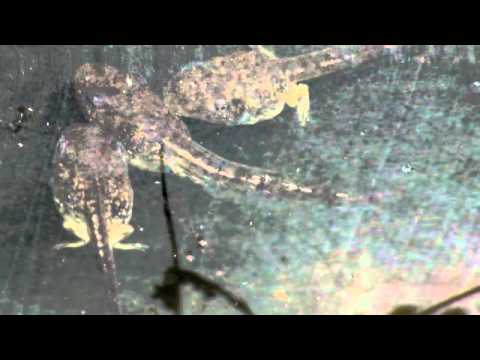 Despite the success of my backyard frog sanctuary, I am extremely worried about our frog friends across the globe. As Kermit the Frog sang, “It’s Not Easy Being Green.” Today, amphibians worldwide are disappearing at an unprecedented rate—over a third of all amphibians are on the verge of extinction.

How can you help? Consider making your backyard frog and wildlife friendly through the National Wildlife Federation’s Certified Wildlife Habitat™ program. It’s fun and really does make a difference for frogs who are suffering from a loss of habitat in many areas.

National Wildlife Magazine also has an excellent new article about amphibian decline: Frogs Need Our Help, So Hop to It!

April 28th is the 4th annual celebration of the international Save the Frogs Day. The National Wildlife Federation is helping to sponsor two events, in Seattle and Yosemite National Park. Look for a Save the Frogs event in your area and come out and support our little green friends!