Help Us Make a Difference for Polar Bears in 2013

As a wildlife biologist researching grizzly and black bears in Alaska, I had no shortage of memorable experiences ranging from immobilizing black bears in their dens to trying to keep a partially immobilized grizzly bear from drowning by holding its head out of the water when it seemed primarily interested in biting me for my efforts.

However, there is no question but that the most memorable experience came when my friend and colleague, Dr. Steve Amstrup, asked me to help him tag polar bears on the frozen Beauford Sea out of the Iñupiat village of Kaktovik on Alaska’s north slope. I worked for the State of Alaska while Amstrup was the chief polar bear researcher for the U.S. government (Fish and Wildlife Service and—later—U.S. Geolgical Survey). Polar bears are classified as marine mammals, like whales and seals, and the Federal government—not the state of Alaska—has management authority for marine mammals. I’d gone to school with Steve and leapt at the chance to do something I never dreamed I’d have the opportunity to do. The reality was even more wonderful than my expectations.

I’d never previously seen a wild polar bear or experienced the amazing environment they inhabit on the arctic ice cap. When our helicopter would land, the ice would drift and the GPS on the helicopter would register a different location when we fired up again. The ice was bisected by channels or leads through which the beautiful and ghostly pods of white beluga whales swam in crystal clear but frigid waters. Best of all, however, was when we’d encounter the track of a bear: we’d follow and, when we found a polar bear that could safely be darted, we marked it as part of Amstrup’s studies (designed to determine how many bears lived in this part of Alaska). Over a period of ten days we marked six such bears.

When I retired from my job in Alaska I moved to Montana, where I took a job with the National Wildlife Federation. At NWF, I could work directly on projects designed to save the polar bears that had made such an impression on me 20 years earlier. This conservation work was now more urgent, as from the time of my experience with Amstrup to the present, studies by Amstrup and others had demonstrated that the very survival of polar bears was in grave jeopardy. Indeed, at the southern part of their range in Canada’s Hudson Bay, where I went twice as an NWF employee, it was clear that polar bears were highly unlikely to persist until mid-century in what is now known as “the polar bear capital of the world.”

All animals, including humans, depend on their habitats for survival. The polar bears’ habitat is the frozen ice platform from which they hunt their prey of seals, which account for 98% of their diet. Over the last 300,000 years polar bears have become such highly specialized predators of seals that they must hunt from the ice. No ice=no polar bears and probably far fewer seals and other arctic animals as well.  And the ice the bears depend on is shrinking dramatically in response to climate change.

This year set a new record low for the amount of polar ice, breaking the previous records just 5 years earlier. There was about half as much ice in Sept. 2012 as the average during 1979-2000.  Polar bears are already responding with reduced numbers, increased mortality of cubs, and more malnourished and starving adults.

Help Us Fight for Polar Bears

Only success from efforts like those being made by National Wildlife Federation to stop climate change can save the polar bear. Unless the amount of greenhouse gasses is reduced from its current 390 ppm to something less than 350 ppm, nothing can save polar bears. Success in this effort depends on more, however, than the efforts of NWF and other conservation organizations—it also depends on each of us individually taking actions to reduce our personal carbon footprints and each of us making it clear to our elected representatives that they must find ways to assure that, collectively, alternative fuels are encouraged and fossil fuels are discouraged.

Please continue to help the National Wildlife Federation in its efforts to address the threats to polar bears and many other species posed by our rapidly changing climate by making a generous contribution todayso our children and grandchildren will know a world where polar bears still can exist in the wild. Donate by the end of the year, and your contribution will be matched—that’s twice the impact for wildlife! 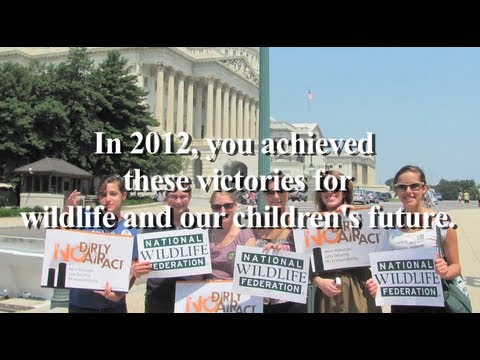