Fishing for Chinook Salmon at sunrise on the mouth of the Columbia River, August 23rd, 2012

With plummeting domestic coal consumption leaving coal companies desperate to find new pathways to new markets, the last investors in the dirtiest fossil fuel have now targeted the Pacific Northwest to be the nation’s largest gateway for coal exports.

Just two weeks ago Bob Rees, President of the Northwest Guides and Anglers Association, traveled from his home on Tillamook Bay to Oregon’s capitol to tell Governor Kitzhaber to take action and prevent the waterways of the Pacific Northwest from becoming a new pipeline for coal pollution. 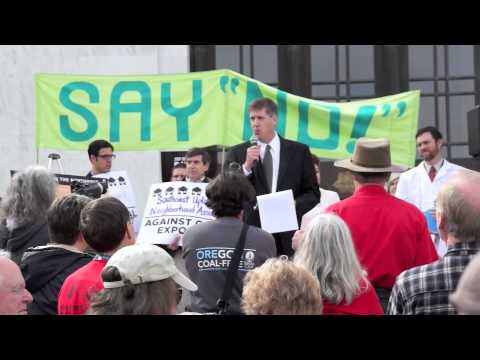 Now in their remarkable joint letter of appeal to the White House’s Council on Environmental Quality, Oregon Gov. John Kitzhaber and Washington Gov. Jay Inslee have called for the “strongest possible terms” of review of air quality and habitat impacts at risk from proposed coal exports.

“We believe the decisions to continue and expand coal leasing from federal lands and authorize the export of that coal are likely to lead to long-term investments in coal generation in Asia, with air quality and climate impacts in the United States that dwarf those of almost any other action the federal government could take in the foreseeable future.”

Read the full text of their letter here.

What About the States?

Federal regulators aren’t the only decision makers involved, however.

State agencies in Washington and Oregon both have their own coal export project permit processes, and so far neither Gov. Kitzhaber nor Gov. Inslee have instructed their staff to block the proposed developments, though there’s been no rush to permit them, either.

Just this month Oregon’s Department of State Lands negotiated yet another multi-month delay for the Port of Morrow coal export proposal so that developers could have more time to respond to the additional questions recently raised.

If federal agencies like the Army Corps of Engineers decide to take a thorough look at the issues raised by Gov. Kitzhaber and Gov. Inslee, and if concerned National Wildlife Federation supporters continue to keep up the pressure, we’re hopeful we can keep the northwest coal-export-free.

But there’s no guarantee of that yet.

Keep up the fight to protect Northwest fish and wildlife from dangerous coal export proposals.

Michael O’Leary of Portland, Oregon is an Outreach Consultant for National Wildlife Federation working on coal export and renewable energy issues in the Pacific Northwest, where he’s been a political organizer for over 15 years. Michael is a certified cycling instructor and a certifiable bike enthusiast, and can often be found on two wheels, rain or shine.