“There he is!” exclaimed an onlooker as the otter’s head peered above the water.

The patient crowd gathered around Sutro Baths—the ruins of a 19th century public bathing pool on the Pacific Coast—had been awaiting the appearance of “Sutro Sam,” the first river otter in San Francisco in over fifty years. And he did not disappoint—he glided in the waters and playfully rolled a few times as if posing for the cameras.

Sutro Sam is used to being in the spotlight as visitors from all over California—and the world—have traveled to get a glimpse of this celebrity otter after the Huffington Post and other notable media outlets featured his story.  Why the fascination? Aside from being almost unbearably cute, the return of the river otter after such a long absence also underscores a conservation success story.

Megan Isadore, co-founder of The River Ecology Project, is celebrating his return for just this reason. “River otters are a sentinel species in that they require healthy watersheds to thrive.  The fact that river otters can live all over San Francisco Bay and the Bay Area indicates that we humans have done something right.  It shows that we can make positive changes to our environment, and we surely need all the encouragement we can get in these environmentally tough times.  So let’s celebrate Sam, and celebrate continuing conservation and restoration of the watersheds that support all living beings.”

Watch a video of Sutro Sam: 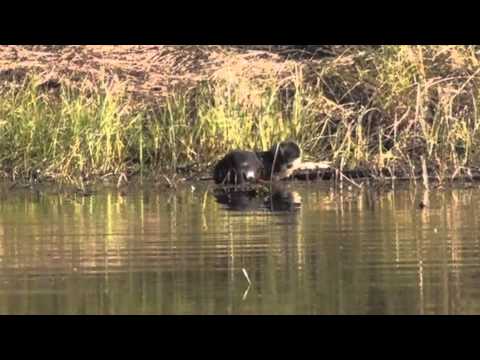 Our attraction to Sutro Sam might also speak to something more fundamental in us—the everyday awe of seeing wild creatures, especially in unexpected places like an urban environment. Megan agrees:  “Sutro Sam is a perfect example of the joy we gain from making the changes great and small that allow wildlife to return and thrive in areas where we haven’t seen them in a long time.”

And the thrill was no less diminished for me, even thought I travel around California all the time viewing wildlife. I gave a shout of delight each time he surfaced and snapped hundreds of photos. I also met a local woman, Mila Zinkova, who has been following his antics for some time and shared her impressive knowledge—and wonderful photos with me. Like many, she returns frequently to the baths to get another glimpse.

With all his popularity, the rangers at Golden Gate National Recreation Area are asking people to act responsibly and respectfully observe Sam from a distance for both the safety of the otter and their own safety. Keeping Sam a healthy and wild otter while he remains at Sutro Baths is a priority.

With Sutro’s Sam popularity, keeping him wild and safe is a priority (photo by Beth Pratt)

Scientists are still mystified by the reason for his appearance, but some think he might have traveled from Marin, where the river otter population has been making a comeback. One attraction to Sutro Baths for Sam is a unique and plentiful (for now) food source. For reasons unknown, people have been releasing pet goldfish into the baths for years and they make for an easy meal for Sam. Another unknown: how long the otter will remain as he will probably have to travel to find a mate. Until he swims away in the quest for romance, his fans will gather daily hoping for a sighting.

As I stood on the concrete wall of the baths watching Sam, someone shouted, “Dolphins!” I simply had to turn around to view a pod of bottlenose dolphins frolicking in the ocean. Perhaps even they can’t resist catching a glimpse of San Francisco’s rare and endearing river otter.