Reject and Protect: Native Tribes and Ranchers rally against the Keystone Pipeline

This Saturday, thousands of cowboys, Native Americans, environmental activists and concerned citizens took to the streets of D.C. in protest of the Keystone XL pipeline. This rally and march was the culmination of a weeklong “Reject and Protect” encampment on the National Mall, a project led by the brave and bold Cowboy Indian Alliance, a group of ranchers, farmers and tribal communities from along the Keystone XL tar sands pipeline route. They came to D.C. to deliver a message to President Obama: reject the Keystone XL pipeline and protect our nation’s people and wildlife from the significant environmental, health, social and cultural costs of the tar sands pipeline.

Saturday kicked off with energizing speeches by some of those most directly impacted by this proposed pipeline. We then marched from the National Mall to the American Indian Museum, to deliver a symbolic tipi in honor of President Obama. Thousands of those at the rally had put their thumbprint on the tipi, showing President Obama the vast support he has for rejecting the pipeline project.

Check out this video that shows some of the truly moving speeches and events from this week of action: 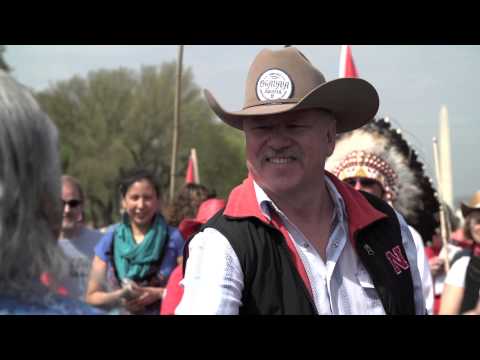 Photo by National Wildlife Photo Contest entrant Jane Becker. Whooping cranes are one of the many bird species threatened by tar sands production.

NWF was at the rally to bring the wildlife voice to the table. Approval of the Keystone XL pipeline would drive production of tar sands oil in Canada. Tar sands oil has three to four times the carbon impact of other oils, making it a huge contributor to climate change. Climate change is the number one threat to our beloved wildlife species and to our own communities.

Along with it’s climate impact, tar sands and the Keystone pipeline are a threat to wildlife habitat. Tar sands extraction is impacting caribou and pushing them out of their forest habitats. Migratory birds, which often travel between the U.S. and Canada, are being threatened by tar sands tailing ponds, pools of toxic waste created by tar sands production. Birds are too often being caught in these deadly pools, mistaking them for a clean and safe habitat. Bird species like the whooping crane, which is already a critically endangered species, are having a hard time fighting back against tar sands.

Even if you weren’t able to make it to last weekend’s rally, you can still speak up for wildlife and communities by calling for the rejection of this polluting pipeline.