One day after BP released a report saying the Gulf is on the road to recovery, we took a trip to one of the most impacted areas from the BP oil spill—Barataria Bay, Louisiana. From a dead baby dolphin to devastation at a bird rookery to active clean-up crews removing tons of oil from barrier islands, we found a very different picture from what BP painted in its report.

Led by NWF Mississippi River Restoration Program Director David Muth and NWF President & CEO Collin O’Mara, we started the day off at Cat Island. Once a vibrant barrier island covered in brown pelicans, roseate spoonbills, terns and gulls, it was hit hard by the oil during the spill. Today, the island is unrecognizable. The thick mangrove forests are all dead and the island is essentially a small spit of mud with the skeletal remains of vegetation, hosting just a handful of birds. Coastal Louisiana is already losing a football field of land every hour, and studies show that the oil accelerated this erosion.

Next we went to East Grand Terre, a nearby barrier island. Roughly 20 workers were out there cleaning up oil. BP confirmed this latest clean-up was part of a process to remove a 25,000-pound tar mat found in late February 2015. Finding oil here is not a huge surprise–two years ago, a 40,000 pound tar mat was found in the same area.

Even worse, in that same area, we also saw a mother dolphin attempting to resuscitate her dead infant. She was surrounded by a group of dolphins–all of them visibly in distress. Such a tragic sight was difficult to witness.

On the same day, The Lens reported that two dead adult bottlenose dolphins washed up on nearby Queen Bess Island.

We don’t know why these particular dolphins died. But we do know that NOAA has determined bottlenose dolphins in this area of Barataria Bay are sick—very sick. They have symptoms of oil exposure—unusual lung masses, adrenal gland problems, even teeth that are falling out. Based on the study, NOAA concluded that “the health effects seen in the Barataria Bay dolphins are significant and likely will lead to reduced survival and ability to reproduce.”

We also know that dolphin deaths in Louisiana remain four times higher than average. And that high numbers of stillborn and premature dolphins have been found in the northern Gulf every spring since 2010. 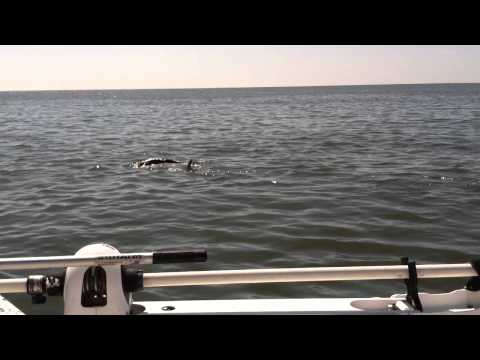 This video contains material that may be disturbing to some viewers. Viewer discretion is advised.​

Read NWF’s full report about the aftermath of the Gulf oil disaster! The effects are ongoing. Here’s how you can help:

We’re still on the ground in Louisiana and across the Gulf working to make sure that BP is held accountable and that the Gulf is restored for dolphins and other wildlife.

Tell BP to accept responsibility for its actions!