The Clock is Ticking for the Arctic National Wildlife Refuge

The Arctic National Wildlife Refuge in Alaska is home to the polar bear and more than 270 other wildlife species. Photo by Patrick Kelley, U.S. Coast Guard.

The Arctic National Wildlife Refuge was established over fifty years ago by President Eisenhower for its “unique wildlife, wilderness, and recreational values.” The 1980 Alaska National Interest Lands Conservation Act protected 1.5 million acres of the Coastal Plain, but did not designate it as Wilderness. The Coastal Plain remains a major target for the oil and gas industry, and could be opened to development under Congressional approval.

Some of America’s most iconic wildlife and fish, including polar bears, grizzly bears, musk oxen, caribou, and hundreds of thousands of birds from around the globe, live in or annually migrate through the Refuge’s Coastal Plain. Until the Coastal Plain and the greater Refuge are designated as Wilderness, the entire ecosystem remains vulnerable, along with the wildlife populations and Native Alaskans who depend upon the refuge for shelter and sustenance.

This video, narrated by “Sex and the City” star Kristin Davis, shows the interconnected world of the ANWR: 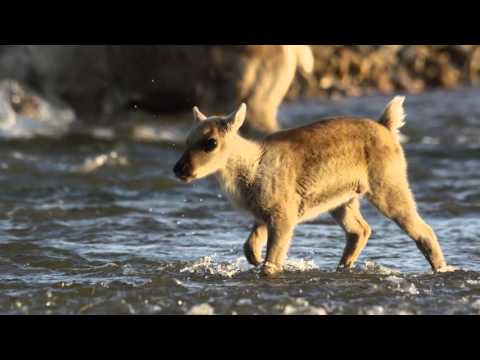 Our public lands are the heritage of all Americans. Visiting the Refuge allows us to experience extraordinary natural and recreational values. The Refuge’s unique value is demonstrated by the fact that it is the only conservation system unit that protects a complete and undisturbed spectrum of all arctic ecosystems found in North America. This includes the peaks of the Brooks Range, reaching 9,000 feet at their highest point, to boreal forests in the Yukon River watershed, and the Coastal Plain’s tundra, outer bays and barrier islands.

The wilderness, ecological integrity, wildlife, adventure-oriented recreation, and Alaska Native cultural and subsistence values found within the Coastal Plain and the greater Refuge are incomparable. The Arctic National Wildlife Refuge is one of the world’s most beautiful and unspoiled landscapes, like other American treasures such as the Grand Canyon and Yosemite, and is worthy of the strongest possible permanent protection to ensure all Americans enjoy it for years to come.

Please urge your members of Congress to designate the Coastal Plain of the Arctic National Wildlife refuge as wilderness, the highest level of conservation protection on Earth.