Dr. Doug Inkley, certified wildlife biologist & senior scientist with the National Wildlife Federation, called me at 6:30am local time. He was heading down to Venice Marina for another long day on the water viewing the effects of the BP oil disaster, but before motoring out beyond cell service, Doug wanted to tell me about his day on the water yesterday, touring Cat Island near Grand Isle.

“How did it compare to what you expected to see?” I asked.

“Honestly, I expected to see booms protecting critical island nesting habitats and people maintaining those booms,” Doug told me. “But instead, I saw booms drifting around & breaking apart, oil ashore on the islands, and no responders or boats anywhere to be seen.” 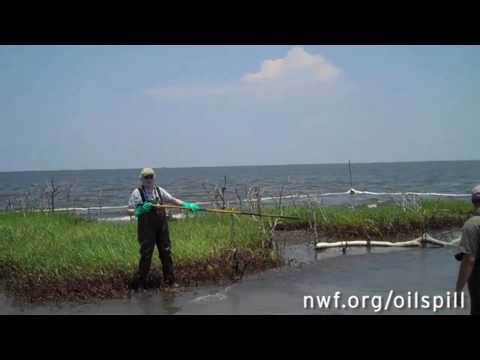 Doug described seeing a brown pelican with its wings dirtied by heavy brown oil. The bird was preening in an attempt to clean itself off. More pelicans were diving for fish not far from patches of “dispersed” oil.

“That bird now faces double jeopardy,” Doug said. “Even if it cleans itself and avoids hypothermia, it could be poisoned by the oil it swallows in the process.”

According to Doug, Cat Island currently has two rings of booms — an outer ring of inflatable boom designed to keep oil out (assuming seas are calm) & an inner ring of white absorbent material designed to soak up oil. But there’s already oil on the island — it either arrived before the booms did or got through them. The oil has been washed about half a foot up above the water line, coating & suffocating plants. Booms just aren’t designed to stand up to even mildly choppy seas — even small waves can wash oil right over them.

Doug also expressed concern for the next generation of pelicans. “The eggs are in the incubation stage right now. If oil gets on a pelican & rubs off on their egg, it’s usually toxic.

“And even if the eggs hatch and the chicks escape direct contact with the oil, the future for the colony is very uncertain,” Doug continued. “With marine life threatened by the oil as well, will their parents be able to find enough food to raise these chicks?”

Doug is back on the water today. Stay tuned for more reports.