Mass Opposition to Keystone XL in DC This Week

It was a festive atmosphere outside the Ronald Reagan building in downtown Washington today, as protesters, many from National Wildlife Federation, flooded the plaza with chants, songs, and demands that President Obama reject the proposed Keystone XL tar sands oil pipeline.

Opposed by top scientists and riddled with charges of lobbyist abuses, the proposed pipeline has become the most controversial environmental policy item for the Obama Administration.

Nearly 1,000 people joined a noontime event that coincided with a final U.S. State Department hearing on the pipeline inside the Reagan Building. President Obama will soon decide whether to approve the $7 billion pipeline, which would increase carbon emissions equal to adding six million cars to America’s roads.

Inside the hearing room, dozens waited to testify against the proposed project.  Among them were NWF President and CEO Larry Schweiger.

Schweiger delivered powerful testimony calling for clean energy policies from the President and the administration.

Earlier in the day, he told a bank of reporters from most major TV networks,

“Tar sands pipelines are dangerous and put our precious natural resources at risk while making the fight against global warming all but unwinnable. At a time when America needs big investments in homegrown clean energy jobs and solutions to global warming, turning to Canada for dirty fuels is the wrong way to go.”

The Obama administration is expected to decide by the end of the year whether it will approve or reject the project.

WATCH: Below is a link to Schweiger’s testimony, where he caused quite a stir by asking why Secretary of State was not presiding and underscored that it was up to the President Obama to intervene in State’s broken process. 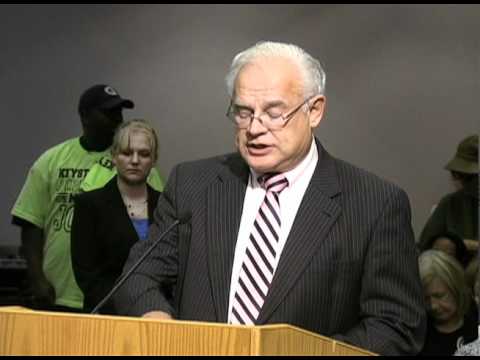