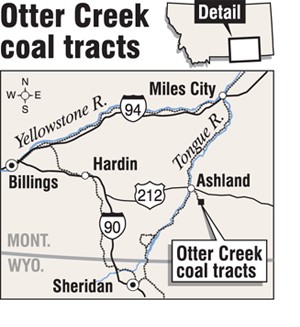 Yesterday, the University of Montana’s Bureau of Business and Economic Research (BBER) released a study of the potential economic impacts of developing the Otter Creek coal mine in southeastern Montana entitled, “The Impact of Otter Creek Coal Development on the Montana Economy.”

If developed, the Otter Creek coal tracks, leased by coal mining giant Arch Coal, would be one of the largest coal mines in the country. If mined, it will industrialize an extremely important and valuable region for both wildlife and agriculture in Montana. When burned, that coal will add 2.5 billion tons of greenhouse gases to the atmosphere.

Although the study’s author, Patrick Barkey, director of the BBER, says that the economic analysis is unbiased, he makes dubious assumptions, ignores the current steep decline in coal demand, and ignores any data that might hurt his economic claims.  These issues lead to overstated figures that should be taken with a huge bucket of salt.

One of the major problems with Barkey’s analysis is that he makes no effort to quantify the direct, indirect and externalized costs associated with the development of a massive greenfield coal mine in a rural, agricultural community. He doesn’t even think it is important to mention that there would be any costs to society and taxpayers. Although he touts his ability to measure indirect benefits of the mine using large multipliers (that he doesn’t defend), he says that social and environmental costs are “hard to quantify.”

Well, I guess if something is “hard to quantify,” a diligent and conscientious economist would just ignore those issues. Seems like the honest thing to do.

Some other major issues to point out in this report include:

Sarcasm aside, as a Montanan, I’m extremely disappointed to see this study coming out of a University affiliated institution. People in Montana, and around the country, need all relevant information before deciding on projects such as the Otter Creek coal tracts, not one-sided reports from an institution that is supposed to be independent, fair and unbiased.

The report title really should be “The Impact of Otter Creek Coal Development on the Montana Economy…brought to you by Big Coal.”