Video: The Beautiful Life of Orcas

Yesterday a friend sent me this three minute video of orca whales traveling through a pass near Vancouver Island.  It is so beautiful and such a rich glimpse into how orcas live, right along the Pacific shoreline.  It made my afternoon — sparkling deep blue water, stunning pine forest and the orcas! 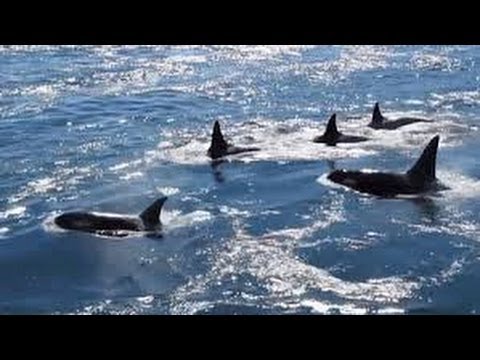 Orcas traveling along the shore near Vancouver Island

What a great inspiration for those of us here at the National Wildlife Federation working on our campaign to save critically endangered orca whales in the Pacific Northwest.

Since 1900, Puget Sound Chinook salmon populations have declined 93% and nine runs of Chinook have gone extinct. Orca whales, which eat primarily salmon, have declined by half. Source: Minette Layne/WikiMedia Commons

The Puget Sound orcas are being pushed to the brink of extinction from declining salmon runs, habitat loss and toxic pollution.  Now, they are facing a new threat:  proposals that would send as many as 100 million tons of coal each year on trains, barges, and supertankers running along the Columbia River and Puget Sound spewing toxic coal dust and diesel emissions that would pollute the waters on which orcas rely.

Add your voice to the newest fight for endangered orcas against Big Coal: Tell the Army Corps of Engineers to prevent coal export at Longview, Washington.

Written by Jane Kirchner
RecentPopular
Get Outside, People and Wildlife