The Eyes Have It: Study Shows Trading Screen Time for Green Time is Better for Kids’ Hearts

We all have a sense that kids nowadays spend too much time indoors, and too much of that staring at screens. As detailed in last year’s NWF Whole Child Report and elsewhere, this leads to kids who are less engaged in the classroom, less interested in nature and less healthy.

Now, it seems replacing ‘green time’ with ‘screen time’ may be even more dangerous than we thought.

From Arteriosclerosis, Thrombosis, and Vascular Biology, via Science Daily:

Six-year-olds who spent the most time watching television, using a computer or playing video games had narrower arteries in the back of their eyes — a marker of future cardiovascular risk, in a first-of-its-kind study reported in Arteriosclerosis, Thrombosis and Vascular Biology: Journal of the American Heart Association.

“We found that children with a high level of physical activity had a more beneficial microvascular profile compared to those with the lowest levels of physical activity,” said Bamini Gopinath, Ph.D., lead author and senior research fellow at the Center for Vision Research at the University of Sydney. “This suggests that unhealthy lifestyle factors may influence microcirculation early in life and increase the risk of cardiovascular disease and hypertension later in life.”

In the study, 6-to-7-year-olds who played outside regularly had wider average retinal arteriola than kids with low levels of activity.

We already know sitting around and staring at screens all day is bad for your body and your heart: according to Journal of the American College of Cardiology, “[s]pending too much leisure time in front of a TV or computer screen appears to dramatically increase the risk for heart disease and premature death from any cause.” I believe I make a hilarious remark to that effect in the video below.

We even know that staying inside all day is bad for kids’ eyes. A 2009 report found that kids who regularly spend time outside may be less likely to develop nearsightedness than their indoor peers.

But this study arrives at the unsettling conclusion that there’s some confluence between the eyes and the heart when it comes to being a couch potato. All the more reason to get kids out of the house and into nature.

You can read NWF’s Whole Child Report here for more on the benefits of outdoor play. While you’re at it, join our Be Out There movement.

Enjoy me trying to talk. Be kind, I usually have a hand puppet. 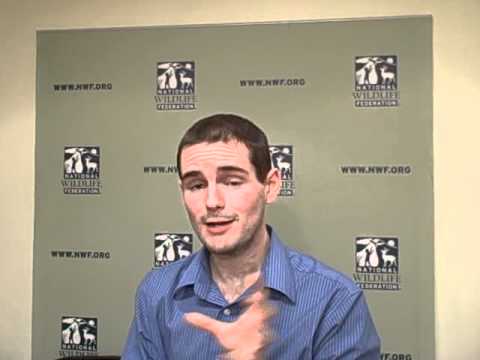 Students and Nature | Be Out There, connecting to nature, health benefits of nature, kids and nature, NWF Whole Child report