This morning at NWF’s headquarters in Virginia, a raccoon mom and her two babies were spotted in the enormous dead standing tree (called a snag) on the edge of the woods behind our building.

The snag used to be a living white oak tree, an important species because of its high habitat value to wildlife.  Judging by its size, I’d guess this oak was several hundred years old at least.  Sadly, it was strangled to death by an invasive exotic vine that is still commonly planted in gardens: Chinese wisteria.

I remember the day several years ago when we finally had to end the last bit of life in the oak by chopping off its mostly-dead limbs, which were becoming a hazard to our building and to anyone walking on the trail beneath the tree.  We decided to leave the trunk standing in the hopes that wildlife would use it.

Seeing the raccoon family this morning using the snag as a place of shelter was a wonderful reminder that in nature, nothing ever truly dies, it’s just transformed into a new form of life!

Check out the video of the raccoon family below, and let us know what wildlife you’ve seen. 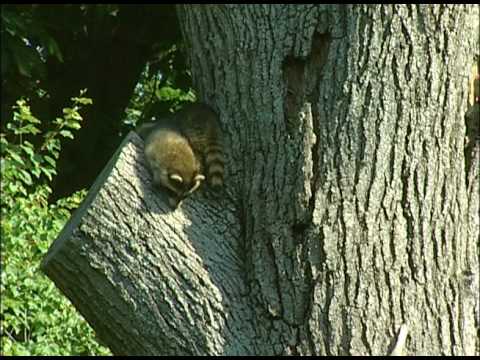