The young babies–five from one nest and four from another–are being hand-fed until they are strong enough to eat on their own. The first four were brought to WSU on April 13 at roughly one week old. Just four days later, the second group arrived at only a few days old.

“We’ve had great horned babies before, but in 10 years, I’ve never had any this young,” said veterinarian Nickol Finch, who oversees WSU’s Raptor Rehabilitation Center. “Pretty much all they’re doing is eating and sleeping.”

It’s rare for humans to get a glimpse of baby great horns. Their parents usually nest high up in trees and are aggressive protectors of their young. Considering they possess talons powerful enough to cart off animals five times the bird’s weight, most people are wise enough to keep their distance.

As for WSU’s nine owlets, the first four survived a fall to the ground near Colton after someone unknowingly cut down a tree where they were nesting, said Finch. The younger ones were brought to a veterinarian in Lewiston and then transported to WSU after their nest was destroyed inside a chimney during a home remodel.

Meet the baby owls in this clip, then learn more at NWF’s great horned owl page: 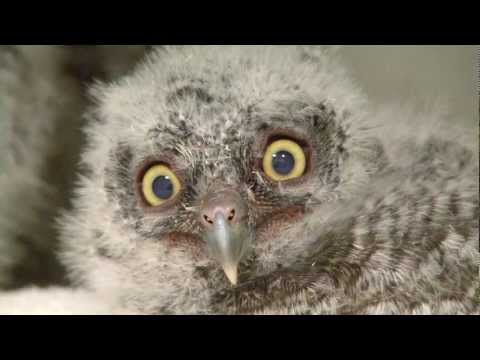