The launch of the Mayors’ Monarch Pledge started in St. Louis with Mayor Slay. Photo by Patrick Fitzgerald

Last year, the National Wildlife Federation started the Mayors’ Monarch Pledge to help save the monarch butterfly, an iconic species whose numbers have declined precipitously in recent years. In the last eight months, more than 150 mayors have joined our first mayor, Mayor Francis Slay of St. Louis, in committing to nearly 1,000 actions to help the beleaguered monarch butterfly. These actions focus on creating monarch butterfly habitat and educating citizens about how they can do the same.

Twenty years ago, over one billion Eastern monarch butterflies migrated to Mexico. In the winter of 2014, only 60 million made the trip. The North American monarch population has declined by more than 90 percent in the past two decades. Scientists attribute this decline mostly to habitat loss and degradation. Cities, towns, and counties have a critical role to play in countering this problem. Mayors who take the pledge are committing their communities to provide monarch habitat in public parks, community gardens, and elsewhere.

One of the most recent mayors to take the pledge comes from North Miami.

Recently, Patrick Fitzgerald, senior director of community wildlife at the National Wildlife Federation, was on-hand to receive a proclamation from the City of North Miami and for the ribbon-cutting ceremony at the new Mayor’s Monarch Butterfly Garden adjacent to City Hall and other municipal buildings. Local champions for this work were also in attendance, including representatives from the Miami Blue Chapter of the North American Butterfly Association and North Miami Councilwoman Carol Keys.

During his remarks, Mayor Smith Joseph commented on why monarchs, pollinators and in fact all plants and wildlife are important to the city and human kind. Watch his speech in the following video: 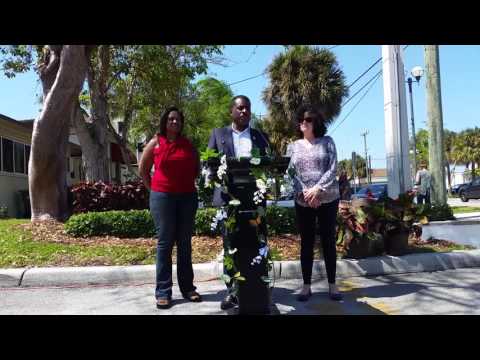 Has your mayor taken the Mayors’ Monarch Pledge?

Learn MoreFind out more and ask your major to take the pledge now!