In 2007, college student Wyatt Taubman created the slogan “Think Green, Live Clean” for a bumpersticker while brainstorming ways to communicate the message of sustainability to his peers. Within months, he had bought the rights to thinkgreenliveclean.com and begun laying the foundations for an environmental awareness blog for young adults. Here he tells us how his university experience shaped this process, and shares tips for other students who are interested in creating real change — both on and off campus!

My name is Wyatt Taubman, I’m 24 years old, I’m a 2009 Environmental Studies graduate from the University of San Diego, and this is the story of ThinkGreenLiveClean.com, a rapidly growing environmental news website for young adults.

The creation of ThinkGreenLiveClean.com has taken me on a roller coaster of a journey that has had both many ups and many downs. One of the high peaks includes being invited by the Founder of Patagonia, Yvon Chouinard, to stay with him at his ranch retreat for a few days and one of the low troughs includes almost being sued by a multi-billion dollar corporation the first year into my endeavor.

It all began in 2007 with a simple bumper sticker brainstorming session that took place in Australia while studying abroad. ‘What better way to promote the environmental movement than with a really catchy bumper sticker?’, I thought. That idea lasted for about a month until my Mom purchased the URL ThinkGreenLiveClean.com for my 21st birthday present…which, at the time, I must say I was not too ecstatic about… You bought me a URL? For my 21st birthday? Are you serious? Shortly thereafter I realized that the present was actually a blessing in disguise because now I could use new media to promote the environmental movement. I quickly became neck deep in creating an environmental news blog for young adults that I did my best to  fill with optimism, beautiful imagery, and a fun and simple writing style, which, I believed, would help to inform and inspire our generation to action. There were other great environmental news blogs out there at the time like TreeHugger and Inhabitat, but as a junior in college their websites and articles weren’t grabbing my attention as I thought they should, and my friends agreed. By the end of my senior year, the most basic form of ThinkGreenLiveClean.com was complete.

Most of my closest graduating friends got involved with the site as “contributing writers” — donating their time to spread environmental awareness to other like-minded individuals around the globe. Shortly thereafter I found myself giving presentations to other environmental studies classes at University of San Diego (USD) and more and more students began jumping on board.  It didn’t take long before I was being contacted by complete strangers interested in writing for ThinkGreenLiveClean.com. During this whole process I had the utmost support from my professors, and whenever I felt the need for advice their office doors were open.

As long as I can remember I’ve had a deeply rooted appreciation as well as concern for our planet. At USD I had many profound classes, influential professors, and idealistic friends, which, I believe, helped to propagate my desire to make our planet a better place. My education at USD didn’t directly prepare me for creating an environmental news website but it did give me the tools and necessary environmental background to pursue this ambition of mine.

Now ThinkGreenLiveClean.com has 20 writers throughout the U.S. and Canada, two interns, and hundreds of visitors a day. Our first contest — called the ‘Greenest Student College Challenge,’ which showcased the most ingenious green ideas emerging from college campuses around the world — was mentioned in dozens of news blogs and University websites throughout the U.S. and Canada, had hundreds of entries, and tens of thousands of visitors! Its success attracted another sponsor, Guayaki Yerba Mate, for our upcoming contest, which will kick off in late January when colleges are back in session for the Spring semester. Over $400 worth of gift certificates and prizes will be given away, so make sure to check back in late January or sign up for our newsletter now to receive notification when the contest goes live. We also just printed our first ThinkGreenLiveClean (TGLC) shirts, which are made of bamboo. 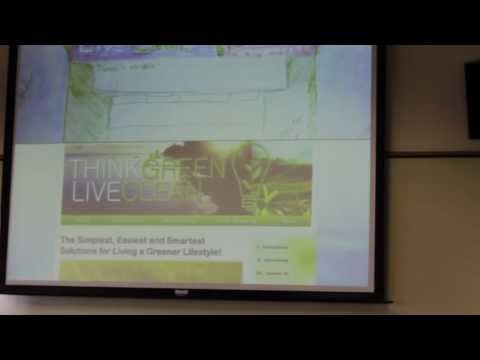 While at USD, I joined our campus sustainability club, but I was simply a member. I wasn’t actively pursuing a role as an environmental leader. However, now as the Founder of ThinkGreenLiveClean.com, all that has changed. My transition from member to leader was slow. As doors opened I simply walked through them. Now I’m embracing my managing role of ThinkGreenLiveClean.com and working directly with many awesome contributors. Together we hope to inspire the planet to Think Green and Live Clean!