Maybe there is some scientific validity to the Biblical parable of Jonah and the Whale, where a human being is swallowed whole by a giant marine mammal. Check out this video of two kayakers who are almost swallowed by hungry humpback whales while out wildlife watching in Alaska. 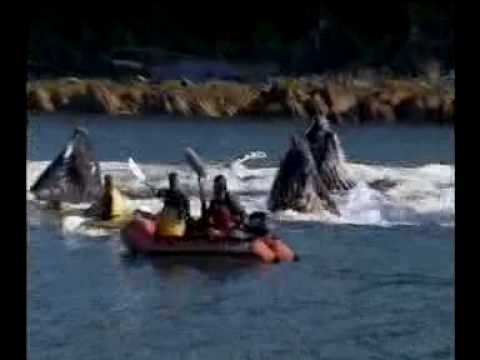 As naturalist Steve Backshall says at the end of the video, we can only have such amazingly large wildlife if those animals have a food source, in this case herring and other smaller fish.

Sadly, the herring population in Alaska crashed several years after the 1989 Exxon Valdez Oil Disaster and many larger animals higher up on the food chain are still suffering today as a result, notably orcas.

We’re almost to the one year anniversary of the Gulf Oil Disaster and it remains unknown what the long term impacts on the food chain will be. NWF is working with scientists and researchers in the Gulf to study and report these impacts as they happen.

It should also be noted that approaching any wildlife as closely as these kayakers did in the video is not only potentially dangerous but in the case of marine mammals, illegal if done deliberately.