Video– Eagle’s flight: How Meaningful a Green Hour Can Be

I tell my son often that 90% of showing you care, whether about someone or something, is simply showing up.  I believe NWF’s Green Hour, holds that same promise of purposefully demonstrating both our love for nature and our families.  My recent Green Hour with my teenage son to see an eagle fly reinforced for me that spending time connecting with nature brings a vibrant clarity to what is most important to each of us.

On the night before I see the eagle fly, her trainer, Francie Krawcke, tells me the bird is having difficulty flying.  It is breeding season and parts of her body are heavy and flying is uncomfortable.  “She’s moody” she adds.   This seasonal and higher reproductive hormone change in the eagle triggers nesting behavior that includes becoming territorial to protect her nest, eggs, young and hunting grounds.

The next morning I write two notes, one to my son’s school excusing him fifteen minutes early so he can see the eagle fly and one to my boss to ask if I can miss an afternoon management meeting so I can see the eagle fly.  I feel a twinge of guilt and think of one of my favorite authors, poet and philosopher, Mark Nepo who says:

“Much of our anxiety and inner turmoil comes from living in a global culture whose values drive us from the essence of what matters.  At the heart of this is the conflict between the outer definition of success and the inner value of peace.  We are encouraged, even trained to get attention when the renewing secret of life is to give attention”.

This quote helps me remember why I choose to spend a Green Hour with an eagle and my 13 year old son Max rather than one more hour at work.

In the car on the way to the Leslie Science and Nature Center (LSNC),  I watch out of the corner of my eye as my son’s head moves up and down to the beat of his iPod.  Earlier Max casually mentions that he is going to bring his iPod “in case I get bored with seeing the eagle fly.”   When we arrive at the Leslie Science and Nature Center, I am more than happy to leave my Blackberry and Max’s iPod in the car.

As we approach the eagle enclosure, she screeches repeatedly.  “She wants to fly.  She knows what’s coming” I whisper to Max.  A handful of other people are milling around waiting to see the eagle fly too.  We’re told by the LSNC staff that the eagle was pushed out of her nest when she was young and hurt her wing.  Put in rehab, she imprinted, forgot she was an eagle, in other words.  This eagle relates more to humans than other eagles and at five years old hasn’t learned all the instincts she would have if raised in the wild, including how to fly.   “She forgot who she is” my voice cracks.  I feel teenage eyes giving me a warning look.

We traipse down the hill to where the eagle will practice flying between two wooden sawhorses about 50 feet apart.  A rope, called a creance line, extends between the sawhorses and the eagle is fastened to it by a metal swivel attached to the Jesses (leather) that are attached to the eagle’s ankles.  This set up allows the eagle to travel the rope during her flight training.

We watch the eagle fly. 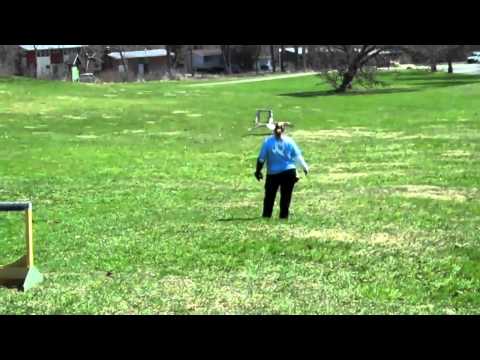 After awhile, someone in the small group gathered in the field shouts,  “can she go off the rope?”  “She’s ready.” Francie answers.  “But, I am not”.  Francie’s hand briefly stops at her heart and then she points at her head. “It’s here.  It’s me.  I’m not ready.” She says.   I glance at my growing boy.  This boy, who stands in front of me every so often, looking right into my eyes saying, “I am almost as tall as you.” To which I always give the same response, “It won’t be long until I have to look up at you.”

In this moment, I want more than anything to see the eagle off the creance line.   I look up and in my mind’s eye the eagle soars above my head, its mighty wings spread against the crisp blue sky.

Since my visit, I’ve learned that the eagle is flying now without the creance line.  She is also making  her public debut flying on May 21 when the Leslie Science and Nature Center holds their annual Mayfly event.  National Wildlife Federation serves as a sponsor of this event.