This past weekend, over 400 young people from as far away as Minnesota, North Dakota, Iowa and the East Coast participated in the much anticipated Midwest Power Shift conference.  From Friday, October 21st-Sunday, October 23rd, hundreds gathered at Cleveland State University to be a part of trainings, workshops, and keynote speeches. 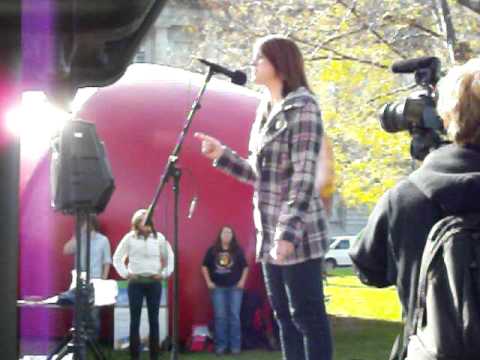 The purpose of the Midwest Power Shift conference was to educate and train young people about topics, such as the green economy, sustainability, and the fight against dirty fuels, such as the Keystone XL pipeline.

Keynotes included:  David Orr– professor from Oberlin College and world-renown sustainability expert, Reverend David Bullock- founder of GreeNation and part of the green revolution in Detroit, and Kandi Mossett- youth leader extraordinaire who has been fighting dirty energy in her home state of North Dakota.

On Sunday, the closing event was a march and rally across downtown Cleveland- where young and old gathered together to tell President Obama that he needs to stand firm on his campaign promises and veto the Keystone XL Pipeline.

Send a message to President Obama, urging him to stop the Keystone XL Pipeline.

If this pipeline is approved, it will be “GAME OVER” for the climate, as Dr. James Hansen, NASA Climate Scientist has noted.