Update 3:02pm: My colleague Patrick Fitzgerald points out this post is now inaccurate – the forecast has now been upgraded to call for 25-foot ice waves. Hey Iceman, surf’s up!

Here’s the thing about people who deny 2010 was tied for the hottest year on record, or claim that even if this year’s warm, it’s all totally normal – what’s your alternative explanation for 18-foot ice waves?

A major blizzard the National Weather Service is calling “life-threatening” is on its way to the Chicago area, also bringing along strong winds that could send 18-foot Lake Michigan waves onto Lake Shore Drive Tuesday night into early Wednesday. […]

Wind gusts could hit up to 50 mph and waves could build up to 14 to 18 feet on Lake Shore Drive. That could result in beach erosion and coastal flooding, particularly on Lake Shore Drive and on other flood prone areas near the lake with overwash from high waves, [National Weather Service meteorologist Samuel] Shea said.

Although a 1/2-inch of ice buildup was reported on Lake Michigan Monday morning, the winds and waves could break up the ice and send it onto nearby roads.

Dr. Amanda Staudt, climate scientist with the National Wildlife Federation, has reported on how the climate crisis is causing extreme winter weather:

At last week’s American Meteorological Society annual meeting, Kevin Trenberth, head of the Climate Analysis Section at the National Center for Atmospheric Research, said it’s time to stop asking whether any one particular extreme weather event is caused by the climate crisis:

It is worth considering whether the odds of the particular event have changed sufficiently that one can make the alternative statement “It is unlikely that this event would have occurred without global warming.” For instance, this probably applies to the extremes that occurred in the summer of 2010: the floods in Pakistan, India, and China and the drought, heat waves and wild fires in Russia. It likely also applies to the flooding in Queensland, Australia In January 2011. 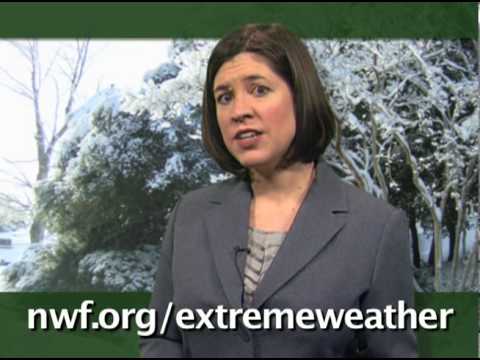