One man’s quest to chronicle a vanishing glacier in Yosemite

Surveying the Lyell Glacier in Yosemite

Last week the Petermann Glacier in Greenland made the news for calving a monstrous iceberg the size of Manhattan, with scientists attributing climate change as the catalyst for this startling occurrence.

Yet Californians don’t need to venture outside their own state to witness a similar, if less dramatic event, as climate change is shrinking many of the state’s native glaciers. “California and glaciers, it’s like pairing Hawaii and penguins. It doesn’t quite go together, but we actually do have living glaciers here in the sunshine state,” observed the Yosemite Conservancy’s resident naturalist Pete Devine.

Devine has ventured to the same glacier in Yosemite for over twenty years, and although his first trip to Mt Lyell and its glacier began as a simple desire to bag Yosemite’s highest peak, after crossing an ice field that had stood for centuries he began a personal quest to chronicle its story.

During this trip, he noticed the letters L and K painted on the rockwall surrounding the glacier in bright orange paint. When he returned from his hike he visited the Yosemite Research Library and found a comprehensive legacy of study that began with John Muir’s visit to the glacier in 1871 when he planted ice stakes to measure its movement. Devine also realized that this body of historical research had recently been discontinued and decided to take action.

“I noticed that glacier surveys that had been conducted for decades had been stopped. And I thought, here is this long stream of valuable data that is going to end and I knew we had to pick this up again somehow. So I obtained a small grant and brought a group of science teachers up to Lyell Glacier to help find the old reference points and do new measurements. And I have been returning almost every year since.” 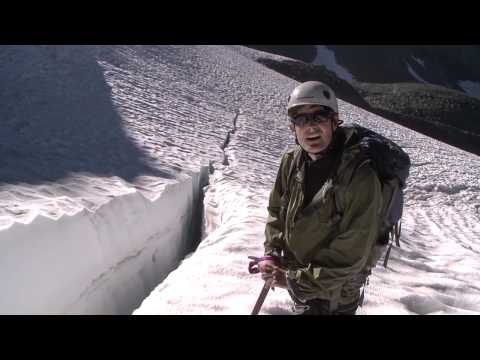 Lyell Glacier is the second largest glacier in the Sierra Nevada, but the biggest on the range’s west slope. The glacier, currently just over a half square mile in area, has shrunk about fifty percent of its size since Muir first surveyed it. Muir writes an early description of the glacier in his book, The Yosemite.

“The Lyell Glacier is about a mile wide and less than a mile long, but presents, nevertheless, all the more characteristic features of large, river-like glaciers-moraines, earth-bands, blue-veins, crevasses etc., while the streams that issue from it are turbid with rock-mud, showing its grinding action on its bed. And it is all the more interesting since it is the highest and most enduring remnant of the great Tuolumne Glacier, whose traces are still distinct fifty miles away, and whose influence on the landscape was so profound. The McClure Glacier, once a tributary of the Lyell, is much smaller. Eighteen years ago I set a series of stakes in it to determine its rate of motion which towards the end of summer, in the middle of the glacier, I found to be a little over an inch in twenty-four hours.”

Today, the Lyell Glacier is close to “stalling out,” says Devine. “A glacier by definition is ice that moves. And you can extrapolate into the near future and know there will not be a glacier there. Just remnant, static ice. People ask me frequently, ‘since you’ve been here such a long time, what is the biggest change you’ve seen in Yosemite?’ And they assume I will comment about there being more bears or less bears or how crowded it has become but in those areas, I could not really say I have visually seen a change. The glaciers, however, are really shrinking away before my eyes.”

In August, Devine is enthusiastically leading another group of people on a trek to the Lyell Glacier to gather more data and to witness firsthand some of the direct impacts of climate change. He’ll also ask the group to consider the repercussions of this and other shrinking glaciers on the Golden State.

“I am just excited to show people a glacier in California—it’s the same thing you watch on the Discovery Channel in Alaska or the Antarctic right here in our backyard. It’s the source of the Tuolumne River that supplies so much water to agriculture and to San Francisco, so it has a direct connect to our home. You turn on your faucet in San Francisco and that water is coming from glacial ice in the Sierra.  If that glacier melts away—actually it’s more appropriate to say when that glacier melts away—who knows what will be left for your tap. So for people to actually see a glacier, to put their boots on it, to learn about that record of recent climate change, I think that’s a unique experience that’s different from a great documentary or website on climate change and glaciers.”

How can you help? Make a donation to help the National Wildlife Federation’s work on climate change issues.

“Energy Dominance”: Three Years of a Disastrous Policy for Wildlife…

Happy Earth Month: How College Students Can Celebrate At Home

10 Ways to Nature Play at Home

Proposed Restrictions on Science Will Hurt People and Wildlife