Creating a Recycling Program at Your School

What gets recycled at your local public schools? My daughter told me that only paper and cardboard were recycled at her school.

Her science teacher, Ms. Marple, said she would love our help setting up recycling centers around the school. Ms. Marple registered our school, Armstrong Elementary, as an Eco-School – a program by National Wildlife Federation to reward green schools.

The grade three classes made the recycling bins, set them up around the school, and designed promotional posters. They made announcements about recycling on the morning TV show. Each week, they gathered and weighed the recycling. Ms. Marple took cans and bottles home to her residential recycling. I took the plastic caps and juice pouches for craft projects.

For the juice pouch recycling, I have collected them for a few years now, and I sew them together to make bags. But what I really wanted to try was sewing trash clothing so we could have a trash fashion or “trashion” show. We were inspired by the Eco-School trash fashion show at United High School in Armagh, PA. If we gathered too many juice pouches, our back-up plan was to send them to Terracycle.

Check out this video about our project: 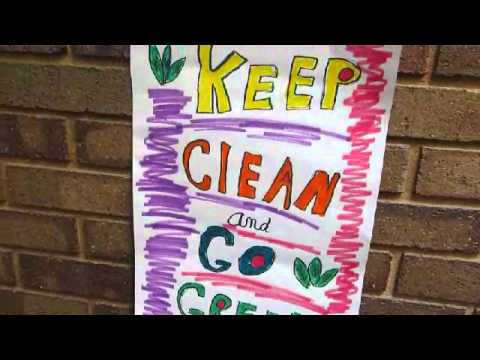 So this year we successfully set up the recycling centers. The grade three classes learned how to gather the recyclables as part of their weekly routine.

There was a natural competitive aspect, where they wanted to say that “if we gather the most recycling of all the classes, then we win!” But I cautioned them by saying that when you gather lots of recyclables, that’s not necessarily a good thing. It means you are choosing to eat things in packages rather than making food that doesn’t require packaging. Choosing options without packaging is called “pre-cycling” and it’s the best option.

This kids were very enthusiastic about the project, especially when I showed the first trash fashion items. I am also developing new trash crafts that allow the kids to design their own trash fashion. My family attended a trash fashion show that was part of Alexandria’s Earth Day celebrations for many ideas. More on that in a future blog!

Thank you to Ms. Marple and the grade three classes for taking on this recycling project. Thank you also to the administrators for allowing the project to happen, and to all the students at Armstrong school who recycled.

National Wildlife Federation’s Storytelling Video Diary Series shares the candid tales of 10 NWF staffers from around the country; armed with their cameras in California, Wisconsin, the Pacific Northwest, Northern Virginia, and Washington, DC, these nine staffers will share with you their individual trials, epiphanies and stories as they unfold in their daily adventures.