The Porpoises Who Left Their Hearts in San Francisco

Tony Bennett isn’t the only one to leave his heart in San Francisco. After an absence of over 65 years, the harbor porpoise recently returned to frolic in the waters of San Francisco Bay.

When walking across the Golden Gate Bridge in 2010 with a friend, we joined a group of onlookers gazing down in delight at what we all thought were dolphins swimming beneath the bridge. I snapped several photos, yet it wasn’t until a year later, after meeting marine biologist and porpoise guru Bill Keener of Golden Gate Cetacean Research, that I discovered the significance of my sighting. He identified the animals in my photos as harbor porpoises and related the remarkable story of their return.

Since hearing this tale I’ve been out to view porpoises with Bill several times, and have definitely caught his enthusiasm for these creatures, so much so that I volunteered to dress up in a porpoise costume and run around popular Bay Area locations for a short video about the animal’s return (see below). Sitting in Lawrence Ferlinghetti’s chair at City Lights Bookstore, shopping at Berkeley Bowl, and dancing on the ferry to Alcatraz in a porpoise costume are just a few of the highlights from my time as a porpoise. You can read about the making of the video and all the wonderful people who made it happen. 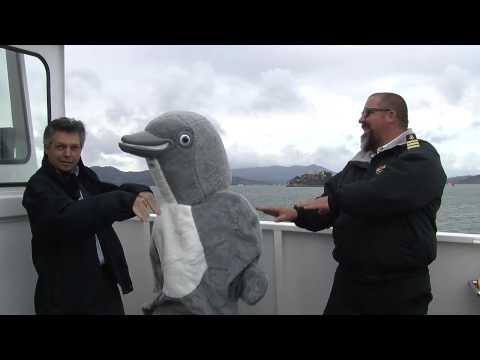 Aside from not wanting to miss the resurgence of Beat poetry or the great burritos in the Mission, why did the harbor porpoises return? And why did they originally leave? According to Bill, several reasons might explain their reoccupation, including the reduction of pollution in the Bay. But more research is needed and Bill is dedicated to finding an answer, as knowing the cause of their departure and subsequent return is vital to ensure the porpoise becomes a permanent resident again.

As Bill observed, “The unexpected return of these animals provides a unique scientific opportunity. San Francisco Bay may now be the best place in the world to study harbor porpoises. The more we can learn about these animals in their natural habitat, the more we can do to help them survive and thrive into the future.”

To celebrate this success and to ensure the marine mammal’s continued residence in the Bay, National Wildlife Federation and Golden Gate Cetacean Research have partnered on a “Return of the Porpoise to San Francisco Bay” campaign. At this point, the National Wildlife Federation is the only major nonprofit supporting this cause and Golden Gate Cetacean Research the only organization conducting a study. To learn more about the campaign, visit www.sfbayporpoises.org.

Ranger Rick helps celebrate the return of the porpoise to San Francisco with a Cetacean friend (Photo NWF California).

Harbor porpoises are notoriously shy and as a result not much is known about this creature in contrast to its more charismatic relatives like the bottlenose dolphin. The unprecedented access to viewing these animals in the Bay is already shedding insight into their once mysterious habits. And to help with this effort, people can share their photos and report sightings at www.sfbayporpoises.org. By looking at scars and pigmentation patterns on the body, researchers can use the photos to track movements of the porpoises. Your pictures will contribute to the most comprehensive photo-identification effort ever undertaken for this species. And be on the watch for the easily recognizable white porpoise that has been nicknamed Mini-Moby!

In celebration of our launch of the Return of the Porpoise to San Francisco Bay campaign, we’re holding a Valentine’s Day contest with a “porpoise.” So share the porpoise love and help keep the hearts of these amazing creatures in San Francisco Bay. Upload your best porpoise-themed Valentine poem, pun, song, haiku or artwork on our Facebook page https://www.facebook.com/NWFCalifornia by 2/14. Winners receive Return of the Porpoise t-shirts, “autographed” photos of porpoises and more!

The entrant must affirmatively agree to these Official Rules  when submitting the entry form for the Contest.

NO PURCHASE NECESSARY TO ENTER OR WIN. A PURCHASE WILL NOT INCREASE YOUR CHANCES OF WINNING. ODDS OF WINNING WILL DEPEND ON THE TOTAL NUMBER OF ENTRIES RECEIVED. VOID WHERE PROHIBITED BY LAW. ONLINE ENTRY ONLY AND INTERNET CONNECTION REQUIRED.

Contest only open to legal residents of the 50 United States or D.C., 13 years and older. The Contest begins February 8, 2013, at 10:00 AM Pacific Standard Time (PST) and ends February 14, 2013, at 11:59 PM PST (“Entry period”). The contest winner’s photo will be published on NWF’s Facebook and other social media pages by February 15, 2013. ARV of all prizes awarded: $10.00 Winners may be required to sign an affidavit of eligibility and release of liability and publicity (where permitted). Subject to full Official Rules. Company: National Wildlife Federation, PO Box 1583, Merrifield VA 22116-1583.