Hunters and Anglers Can’t Afford to Double Down on Denial

Hunters and anglers have been on the front lines of several major environmental policy battles over the years, including playing a major role in passing the Clean Air and Clean Water acts, eliminating acid rain, and establishing more public lands throughout the country. Now hunters and anglers face the greatest challenge to our sporting traditions yet: a warming climate.

Climate change is already having significant impacts on fish and game animals and their habitats, putting hunters and anglers on the front lines of climate policy. Many sportsmen and women are seeing climate change restrict their hunting and fishing opportunities and are very concerned about what climate change means to the future of our sports. Thankfully, an increasing number of sportsmen and sportswomen are up to the challenge.

Chris Crosby is one such sportsmen. From an early age growing up in Minnesota through the present day in his adopted home state of Colorado, Crosby has hunted and fished his whole life.

“My favorite thing used to be duck hunting, and now it’s trout fishing,” the 77-year-old Crosby said, pausing to adjust his hearing aid and then adding with a wry chuckle, “I mostly fish now because my ears are damaged from shooting guns too much.”

Crosby is known throughout Colorado, and especially at the capitol in Denver, as a dedicated volunteer lobbyist on behalf of wildlife conservation, hunting and fishing. A retired farm and ranch real estate broker with four children and 10 grandchildren, Crosby has been lobbying Colorado governors, federal and state legislators, and local leaders for decades to get them to value Colorado’s fish and game.

He’s not affiliated with any particular organization, but is a private citizen who wants to make the world a better place for his grandchildren. He sees climate change as the biggest threat to not only hunting and fishing in Colorado, but also the health and welfare of all people.

“The future my grandkids will have to deal with is scary because of climate change’s impacts on food and water in many counties, especially in Asia,” Crosby said, referencing one scientific report after another to justify his comments. “My grandkids are not going to have the opportunities that I had because of climate change, and that makes me want to do all I can about it now for their sake.”

A proud moment for any sportsmen grandfather is when he gets his grandchildren into fish. Photo courtesy the Crosby family.

Crosby, like many veteran sportsmen and women, are seeing the effects of climate change first hand. He shakes his head in frustration as he mentions his favorite Montana trout streams that are now closed to fishing in August and September because the water temperatures are too hot. He also laments how Colorado’s tailwater fisheries produce fish that are so exhausted due to stream warmth that he worries they are not surviving after release.

“We used to have a great deal of duck hunting 40 years ago in Colorado, but now we have fewer ducks and they are coming down later in the fall,” he continued. “This is just anecdotal — I’ve noticed this over the last 20-30 years of observation in the field — we also see that our elk hunts are like walking through a bowl of rice crispies, the ground is so dry and warm, and now many states are seeing moose die from ticks.”

Once Crosby gets started talking, his passion for fish and game and his frustration with climate change deniers becomes more and more evident.

“Pheasants, trout, big horn sheep, mule deer and elk, walleye, smallmouth bass, antelope, muskies, rocky mountain goats, sage grouse, lesser prairie chicken, and chukars: they are all going to have to shift north as the southern states get too hot and dry for them to survive,” he said, his voice rising while counting off the species on his hands. “Also shifting north will be the feral swine, the African killer bees, and malaria mosquitoes. All will be shifting north. Basically hotter and dryer is tough on most game animals, and it’s also tough on wildlife agency budgets, leaving less money for access and habitat.”

Crosby is among a new breed of sportsmen who refuse to deny what they are seeing for themselves firsthand, and are willing to take the tough stands — even bucking their own political party in many cases — to do something about it. 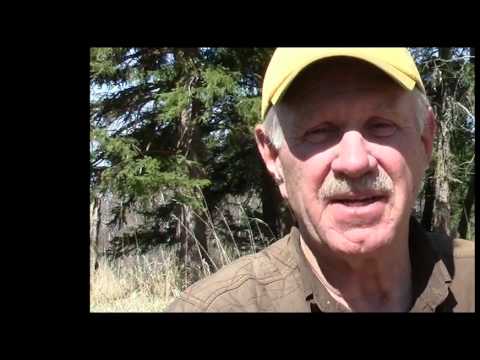 “Not too long ago conservation was not a polarizing issue, many Republicans were conservationists,” lamented Crosby. “Anti-conservation is not only unhealthy, it’s also bad economics. The economy is not going to do well with failing nations all over the world at war with each for diminishing food and water. The stock market is very influenced by uncertainty and political instability.”

In many ways, sportsmen and sportswomen like Crosby are uniquely situated to make a difference to curb climate change because sporting traditions and sportsmen’s conservation concerns cross party lines. At least in the near future, the carbon-producing industries and their politicians on the far right are not going to listen to the environmentalists of the far left. Those two sides are too firmly entrenched, but the right will have to listen to hunters and anglers, especially ones in their own party who have had enough of lost sporting opportunity and are willing to take the tough stands needed to ensure hunting and fishing opportunities for their children and grandchildren. In many red states throughout the country, environmentalists cannot even get in the state capitol door (figuratively speaking), but both parties still respect sportsmen and women. The ecumenical community is another voice that needs to be loud and strong to curb climate change, because it also can cross party lines.

“Sportsmen must put pressure on politicians to do more with renewable energy and less subsidies for fossil fuels,” Crosby said. “All the things we can do, we should be doing very, very quickly because we are going to get past the tipping point that no matter what we do, we won’t be able to stop greenhouse gases and the temperature will continue to rise.”

Climate change poses an immediate and specific threat to hunting and fishing in America, challenging the traditions and values of sportsmen and sportswomen, our respect for the land, and the legacy we leave to future generations. America’s hunters and anglers must demand our political leaders lay out their plans for protecting our air, water, wildlife and public lands. We can’t destroy America’s great outdoors and leave whatever’s left of the mess for our children and grandchildren to clean up. Sportsmen and women have been an important voice for fish, game and outdoor recreation in past environmental policy, and we must be so again.

One very important step we can all take right now is to cut the carbon pollution that currently is on track to cause significant warming by mid-century. Carbon emissions can be addressed by implementing the Environmental Protection Agency’s authority under the Clean Air Act to reduce carbon pollution from existing power plants. Incredibly, nearly 40 percent of all U.S. carbon pollution comes from just one source — power plants. Limiting emissions from power plants is a critical step towards slowing the warming temperatures that harm our fish, game and sporting traditions.

Looking for other ways to be involved? Join the team! The National Wildlife Federation is building our strong and dedicated team of sportsmen and sportswomen advocates, and we want YOU on the team!  When you join today, you will receive news, updates, and action opportunities focused on conserving the fish and game animals that sportsmen and sportswomen cherish. You will be also be entered to win some great outdoor prizes!

“Think about what your core values are, and I bet each and every one us would include clean air, clean water and safe food,” Crosby concluded. “What’s important to my kids and grandkids is having a healthy place to live, and if we do not address climate change, they will not have that. It’s really that simple. Climate change is the mother of all game changers.”