A Voice for Wildlife in Politics

NWF Staff   |   March 14, 2016
Since 1936, the National Wildlife Federation has worked to conserve the nation’s wildlife and wild places. As part of our 80th anniversary celebration, we are recognizing important moments in our history that continue to make an impact today.

On March 3, 1961, President John F. Kennedy hosted a dedication ceremony for the new headquarters of the National Wildlife Federation in Washington, D.C., highlighting the national importance of protecting our wildlife and wild places. 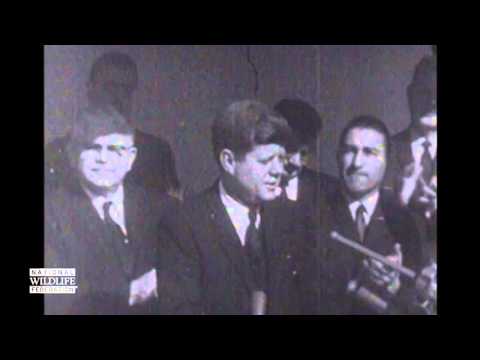 Kennedy believed NWF embodies President Franklin Roosevelt’s vision for a united group of wildlife conservationists and organizations. Today, the National Wildlife Federation’s headquarters sits on a space surrounded by wildlife habitat in Reston, Virginia, with nearby walking trails and many opportunities for wildlife spotting. The Washington, D.C. office, the National Advocacy Center (NAC), sits in a new location in the heart of DC and works on a multitude of projects spanning environmental policy, grassroots outreach, law, government affairs, and media outreach.

Moose are one of the many wildlife species protected by the NAC’s work to combat climate change. Photo by National Wildlife Photo Contest entrant Dick Forehand

The dedicated staff in the National Advocacy Center advance NWF’s national and international agenda, as well as focuses on Congress and other decision-making bodies to ensure environmental legislation is drafted and passed.

The National Wildlife Federation and its state and territorial affiliates collaborate with numerous senators and representatives to help secure legislative victories over the last eight decades. Some of the major focus areas include the Clean Water Act, Endangered Species Act, Clean Air Act, Conservation Funding, and Farm Bill. 2015 saw many great successes in protecting wildlife from climate change.

National Advocacy Center staff are currently at work on a number of issues that impact wildlife and communities across the country, including

Join the National Wildlife Federation to support our advocacy work for communities and wildlife across the nation.