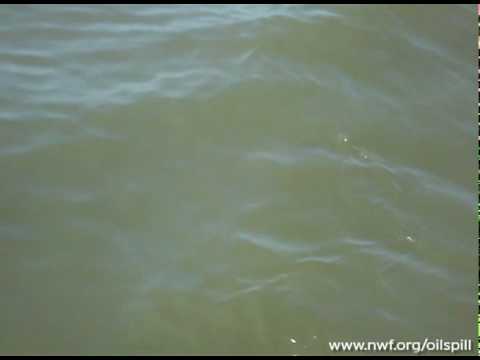 Here are some of her notes:

The park was open but the beach closed. They did let the public go out on the fishing pier and the lookout tower. I wasn’t sure if I wanted to go back out on the pier after spending an hour in the lookout tower. But, I took a look and saw this dolphin near the pier. I ran out and just filmed it moving back and forth around the pier until it disappeared. Maybe back with its pod out farther away from the pier.

The water is much browner than I thought it would be. I looked at the water from the pier through binoculars. I could see the tiny bits of dispersant in the water along with tiny globs of oil. Looks like oily salad dressing when you shake it up and it gets really well mixed. Shiny drops of oil. I think the water looked so brown because of the red dispersant mixed in.

Oh, and the smell – ocean meets mechanic’s shop with a whiff of corn syrup processing plant. I saw laughing gulls from the Pier with oiled tails. Lots of pelicans, but they looked OK. One Great Egret that had a red oil stripe down the belly.

All of Grand Isle is a tourist town for sports fishing and the beach. 95% of the beach houses all closed up. Beaches all closed.

For all the latest news on how the oil spill is impacting the Gulf Coast’s wildlife and to learn how you can help, visit NWF.org/OilSpill.