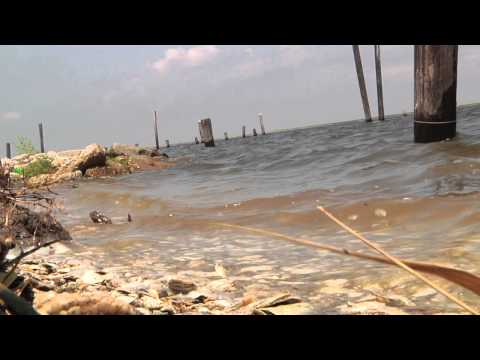 Completed in 1965 as a shortcut between the Port of New Orleans and the Gulf of Mexico, the Mississippi River-Gulf Outlet (MR-GO) has been identified as one of the biggest contributors to coastal erosion in southeastern Louisiana.

Its closure was welcomed by many in 2009 but the channel is a prime example of how manmade canals have caused catastrophic erosion in the state.

What happens next may serve as a model for how such channels and canals may actually be used to replenish what they destroyed.

Louisiana’s wetlands have been cut apart over the years by the oil and gas industry. Between the early 1900s and the 1980s, the more than 9,000 miles of canals were cut through Louisiana’s wetlands. As they opened up into the Gulf of Mexico, they provided a direct avenue for salt water to move deep into the wetlands, increasing erosion and wreaking havoc with the natural order.

During the Gulf oil disaster, such manmade channels also served as a highway to bring oil straight into the heart of the wetlands.

MR-GO wasn’t created for the oil industry but as a shortcut for manufacturers and importers in New Orleans. Since was authorized in 1956, there has been outcry from residents of New Orleans and St. Bernard Parish that it would exacerbate saltwater intrusion and offer a direct path for hurricane storm surges to pour into the city. It did exactly that in 2005 during Hurricane Katrina with more than 20 levee breaches that had a large role in flooding more than 80 percent of New Orleans.

Randy Lanctot, director of the Louisiana Wildlife Federation, said the MR-GO has been tearing apart the surrounding wetlands for years. The growing width of the channel, saltwater intrusion and destruction of swamps to build the canal created a manmade disaster that has continuously shrunken the map of Louisiana.

“We ended up with an extremely long deepwater channel cutting right through an area of wetlands that no longer got nourishment from the river and was already in decline,” said Lanctot.

According to the Lake Pontchartrain Basin Comprehensive Habitat Management Plan (pdf) from 2006, the MR-GO has impacted over 600,000 acres of habitat in Louisiana. This includes the loss of esturarine wetland, the annual dead zone in Lake Pontchartrain and the shift from lacustrine to estuarine. Although built at a width of 650 feet, it had grown to an average width of over 1,500 feet by the time it was closed. John Lopez, PhD, director of the Coastal Sustainability Program at the Lake Pontchartrain Basin Foundation, said that the canal has cause major alterations to the hydrology in surrounding areas with the funnel for saltwater intrusion being a death blow to some habitats.

“The cypress swamp in the central wetlands and most of that swamp has died off. Just about everything was altered by the hydrology of the MR-GO,” said Lopez.

The MRGO Must Go Coalition, which is comprised of members including the National Wildlife Federation, Sierra Club and Lake Pontchartrain Basin Foundation, has campaigned since 2008 to push the Army Corps of Engineers to close the canal. Since the canal closed in March 2009, the group has promoted restoration of the surrounding wetlands. Amanda Moore, project organizer for the NWF’s Coastal Louisiana Restoration Project, co-authored the report Mister Go Isn’t Gone Yet, which highlights recommendations on what needs to be done.

Some of those recommendations include reintroducing freshwater to parts of the marsh through a diversion and restoring channel banks and land bridges to prevent further erosion and wave damage. The report also calls for restoration of the Central Wetlands, a 30,000-acre area near the Lower Ninth Ward and St. Bernard Parish.

“We’re trying to figure out the best way to restore the area. To restore a lot of the major ecological functions, to restore some of the critical landscape features like the Biloxi marsh and shore up the bank lines,” said Moore.

Freshwater diversions may offer the biggest promise. The plan proposes the reintroduction of freshwater at Violet as a top priority. It would bring in freshwater from the Mississippi River to build and sustain wetlands in the Central Wetlands Unit, Biloxi Marshes and along Lake Borgne. The diversion could also deliver sediment that could be directed to Proctor Point, an important wetland area along the MR-GO levee. That could help re-establish a forest to provide some storm surge protection.

Lopez said that while the canal’s closure was the first step in addressing the problem, the canal itself can be used to rebuild the surrounding wetlands if used properly.

“We have already seen in the past year the changes in salinity and some indications of the hydrology going back to what it was pre MR-GO. That channel is still there and I think there is potential to use that positively,” said Lopez.