HEAT WAVE: Bad News (for) Bears, and Us!

The following is a guest post by NWF Senior Scientist Dr. Doug Inkley.

This heat wave is bad!  The eastern U.S. is suffering through stifling heat and humidity, which have caused 22 deaths already.  The U.S. Weather Service says heat is the number one weather-related killer in the country, claiming more lives each year than floods, lightning, tornadoes and hurricanes combined.

Had enough? Climate experts warn that our future will be hotter because of greenhouse gas emissions causing global warming.

Hotter is the New Normal

Recent National Wildlife Federation reports paint a deathly hot future unless we take immediate action to reduce global warming pollution. Summers like the current one, or even worse, will become the norm by 2050 if global warming pollution continues to increase unabated. For example, Washington, D.C.,  which has a historical average of fewer than 30 days annually over 90°F, is projected to have 55 to 100 days annually over 90°F by midcentury, depending upon how much emissions are curbed.  Absent significant action to reduce greenhouse gas emissions, the story would be much the same across the U.S.

It’s not just humans taking the heat.  It’s bad news for bears, too.

WARNING:  As a colleague just said to me, the following information “is something that will make you cry.”

Polar bears are being forced to swim very long distances because of melting sea ice due to climate change, which can be deadly for their cubs.  A new study shows that when mother polar bears had no choice but to swim long distances to reach the safety of sea ice or land, nearly half of their cubs simply didn’t survive! Polar bears are outstanding swimmers, but scientists warn that these long-distance marathon swims  –some more than 400 miles and lasting up to 12 days— puts them at risk of drowning, not to mention severe exhaustion if they survive.

And Arctic ice conditions are as bad as ever.  This spring and summer, the amount of Arctic ice has been at or just below the record low of 2007.   But it’s not just polar bears…global warming is the single biggest threat to wildlife across the planet.

Clearly, it is time for Congress to take long-overdue action to reduce the nation’s greenhouse gas emissions and put us on a path to a clean energy future.  That would be good for us, and finally some good news for bears. 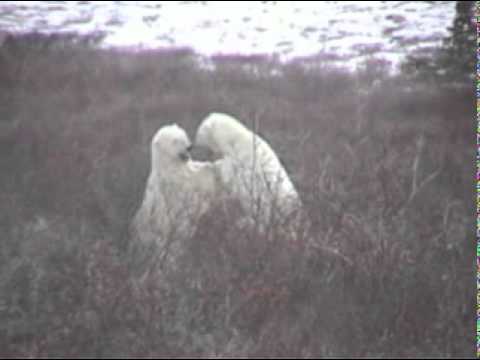