Why I Am Thankful for Nebraskan Ranchers, Daryl Hannah, Leslie Iwerks, and the Delay of the Keystone XL Pipeline

Nebraskan rancher and anti-pipeline spokesperson Susan Leubbe who is featured in the film Pipe Dreams.

Last week I attended the Los Angeles premiere of Pipe Dreams, a documentary by Leslie Iwerks that examines the Keystone Pipeline XL project. The National Wildlife Federation has been campaigning against this environmental travesty for almost two years, and our Senior Vice President for Conservation, Jeremy Symons, appears in the film. Pipe Dreams is one of eight films shortlisted for the Academy Award for best documentary.

As Pipe Dreams demonstrates, the project—despite claims by TransCanada and others—provides very little (if any) economic benefit to the United States, has devastating environmental consequences and poses grave threats to human health, livestock and agriculture. The proposed route crosses some of the most environmentally sensitive areas in the region and through the family lands of hundreds of farmers and ranchers. As Nebraska Republican Senator Mike Johanns has observed: “[There] could not be a worse route in the entire state of Nebraska … Maybe couldn’t be a worse route in the entire country.”

View the trailer for the documentary Pipe Dreams 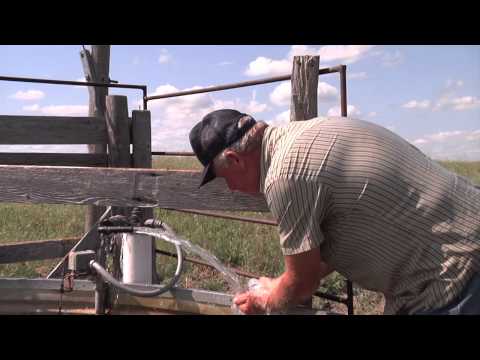 Viewing the fly-overs in the film of the tar sand mining sites was akin to watching the terrifying scenes of Mordor in Lord of the Rings. Daniel Glick describes the sites in his article “Tar Sands Trouble” in the most recent issue of NWF’s National Wildlife: “Massive toxic tailings ponds, open-pit mines, chemical-belching smokestacks and processing plants now stretched along hundreds of square miles that were once part of an intact boreal forest wilderness.” These new wastelands threaten numerous wildlife, including moose, caribou, migrating songbirds, and the whooping crane, a bird once on the verge of extinction.

Tars sands, also known as dirty oil, bears little resemblance to the smooth brown liquid we pour in our cars every three months or 5,000 miles. As a recent NWF report concluded, “The Canadian tar sands industry is, by almost any measure, one of the most wasteful and polluting industries humanity has ever invented.” Producing oil from tar sands creates toxic lakes with cancer-causing chemicals, and emits three times the greenhouse gases of conventional oil. And tar sands oil also has an atrocious safety record—it accounted for over half of all crude oil spilled in the U.S. in 2010. Recent spills in Montana in the Yellowstone River and in Michigan in the Kalamazoo River attest to the destructive nature of the spills—tars sands oil is difficult to clean up as unlike conventional crude, it sinks in water.

So given all these alarming statistics I just cited, why I am thankful?

This pipeline was thought to be a done deal by TransCanada. Yet a grassroots movement by the American people caused President Obama to delay the project and request further environmental review.

At the screening, I was honored to be a member of a very inspirational panel with director, Leslie Iwerks, the film’s narrator, actress/activist Daryl Hannah, producer Jane Kosek, and mother-daughter Nebraskan ranchers and anti-pipeline spokespeople featured in the film, Susan and Allaura Leubbe. And I give my thanks to all of them for the commitment they displayed in not letting Big Oil bully American citizens into approving a pipeline that threatens people, wildlife and our homelands. Susan and Allaura inspire me with their love of their ranch and their refusal to be intimidated by threats of eminent domain from TransCanada. Daryl Hannah inspires me with her relentless activism for all life on this planet. Leslie Iwerks inspires me with her determination in exposing social and environmental injustices with her excellent filmmaking. And I am inspired by nonprofits like NWF that help citizens with these important fights. So I’ll add them all to my list of what I am thankful for this Thanksgiving.

Although the Obama administration recently delayed the decision of the Keystone Pipeline XL, we still need to take action to ensure the project is permanently halted. Visit NWF’s Tar Sands Action center to find out how you can help.

Pipe Dreams is showing at the Laemmle Sunset 5 Theater in Los Angeles through November 24 at 7:30 pm daily. For showings of Pipe Dreams in your area, visit the film’s website.

Written by Beth Pratt-Bergstrom
RecentPopular
Conservation, Garden Habitats, Get Outside, Students and Nature