This Endangered Species Day, Give Florida Panthers Room to Roam!

You may have seen the recent story of the 12 week-old Florida panther that was left for dead on the side of the road after getting hit by a car. After two weeks of rehabilitation, the kitten is now able to stand for short periods of time and get around with the help of a “quad cart”–a sling on wheels that was built for a small dog. But the head trauma caused by the accident will likely prevent him from ever being returned to the wild.

Here’s a video of the adorable kitten: 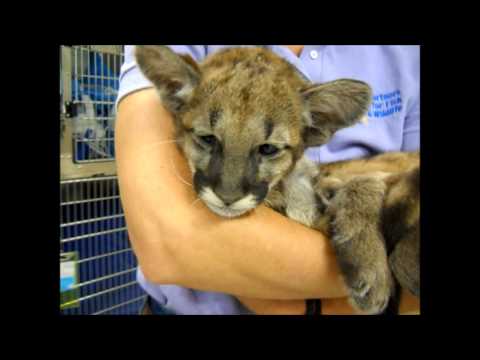 Sadly, this story is not uncommon in south Florida–home to the only remaining breeding population of panthers–where a sea of strip malls, housing developments and roads continue to destroy and fragment precious habitat. Collisions with motor vehicles are now one of the top causes of panther deaths. In fact, this same kitten’s brother was struck and killed by a car only a few weeks earlier.

Compounding the pressures that panthers are facing from unchecked development are impacts from climate change, threatening the limited habitat that remains. Due to Florida’s very low elevation, panthers are especially vulnerable to the stronger hurricanes and sea level rise that are predicted to inundate their habitat.

Florida panthers are one of the most endangered mammals on earth, with only about 100-160 remaining. Although they are protected under the Endangered Species Act, panthers are still not protected from the single greatest threat to their survival: habitat loss. And while there have been some wonderful successes in creating corridors to connect habitat areas, they are literally running out of space.

But hope remains for these majestic cats. The National Fish, Wildlife, and Plant Climate Adaptation Strategy and other federal conservation programs that protect panther habitat are crucial to preventing the species–and many others–from going extinct, but they urgently need funding to move forward.

Today is Endangered Species Day, and your voice is needed to ensure decision makers and resource managers have the resources they need to safeguard Florida panthers from extinction.