NWF.ORG
Conservation Get Outside Students and Nature

When you hear the term “climate change,” what image comes to mind? Smokestacks? Bumper-to-bumper traffic on six-lane highways? Wilting crops and flooded streets? If James Balog has anything to do with it, soon enough we will all think of glaciers…glaciers of the melting, calving and rapidly receding variety.

Opening in select theaters this weekend is the documentary Chasing Ice, which chronicles photographer Balog’s worldwide journey to accumulate visual evidence of the effects of climate change. We can’t necessarily see carbon pollution, but we can see what it does. And we can see it most clearly in the chilliest places on the planet–Iceland, Greenland, Alaska. 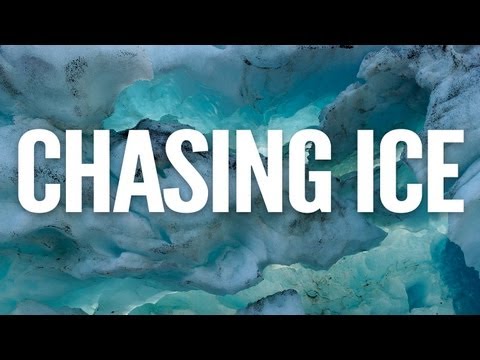 Balog and his team of scientists and engineers travel from glacier to glacier setting up cameras, bolting them to mountainsides or nestling them between boulders and out of the hurricane-force winds. The cameras are part of a high-tech, specially-constructed package made to (mostly) withstand harsh conditions, while still capturing an image every sixty minutes during daylight hours. The team checks back on the cameras periodically, downloading the files and fixing technical difficulties. Then they compile all the images, a virtual flipbook of sorts, showing the changes in glaciers over time; in this case, several years.

Since I am a mind-reader, I know you are thinking, glaciers are huge! Does a glacier’s size really change that much in such a short amount of time?

You know the term “moving at a glacial pace,” used to infer that something is happening so slowly that it’s only noticeable on a geologic time scale? Based on Balog’s time-lapse images, it’s probably time we clarify that term…”moving at a glacial* pace” (*pre-industrialized-era glacier, that is). So yes, a glacier’s size really does change that much in such a short amount of time. Yes, because moving at a glacial pace is not quite as slow as it used to be.

The compiled images are really something else, something that we literally have never seen before, and the footage of Balog and Team tramping around ice fields and rappelling into crevasses is enough to make any cautious person’s stomach drop. But on a level far greater than promoting the aesthetic beauty of far-off places, Balog manages to bring the average person to far corners of the world, and closer to the ice-melting realities of our carbon-polluting society.

After you see this stunning documentary, visit the Chasing Ice website to spread the message and encourage high-profile members of our society to give it a watch.