My Close Encounter With a Clouded Leopard

Recently I had an amazing opportunity through my graduate program to visit the Smithsonian’s Conservation Biology Institute (SCBI) – formerly Conservation Research Center – located in Front Royal, VA.  As someone who has had an interest in wildlife conservation since the days of my fourth-grade “save the rainforest” unit, this was one of those experiences that will truly stay with me.

I was able to capture a video clip of one of those amazing animals – the Clouded Leopard, a highly threatened Asian cat. They are beautiful but notoriously shy (not to mention nocturnal) creatures. We were lucky that the male adult decided to come out for the crowd when the keeper brought a potted plant (an intriguing “toy” for the cat) into the cage. 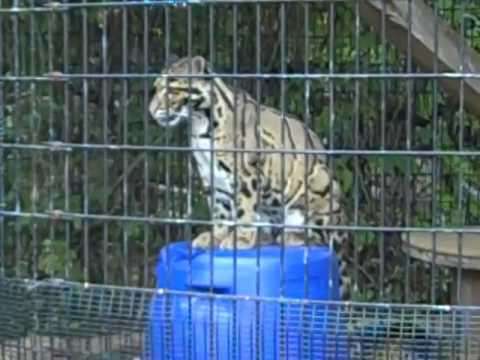 In their native habitat in Southeast Asia these cats are highly threatened. Their coats are in high demand and the illegal fur trade is a rampant problem. Poaching along with habitat destruction and degradation remain major threats to the future of the Clouded Leopard.  In an effort to maintain the diversity and ensure survival of the species, SCBI has successfully reared cubs at the facility since the breeding program began in 1978 and currently holds the largest population of clouded leopards in North America.  The Institute has also partnered with the Thai government to focus on preserving this treasured species and its native habitat.

The facility serves as a “last stop” for many species on the brink of extinction. They are a research and breeding center for endangered birds and mammals where many are being bred at the facility to maintain genetic diversity and provide reserves for highly threatened species. The work done at this facility provides invaluable information to researchers working to manage and restore wild populations across the globe.

Normally a closed facility, they open once a year for an “open house” organized through Friends of the National Zoo (FONZ). I highly recommend keeping an eye out for this next year. They have a plethora of great activities for families and kids to learn about the importance of conservation and biodiversity….not to mention they have really cool animals!