Here Be Dragons, Hopefully: Sydney Joins Effort to Save Komodo Dragons in 2012

Komodo dragons: as adorable as they are awesome (Wikimedia Commons)

That’s as intolerable as eating less than 80% of one’s body weight might be to an extremely hungry Komodo dragon.

And so, I provide. Item one: noted something-or-other Kim Kardashian recently ‘freaked out’ at a Komodo Dragon proffered by a guy who sort of resembles Robert Goulet, per People magazine sources.

Item two, more noteworthy for a wildlife conservation group: the City of Sydney has joined the Taronga Zoo in launching a Year of the Dragon 2012 Chinese New Year campaign to save Indonesia’s beleaguered mammoth lizards:

The Komodo dragon […] is found only on five islands in eastern Indonesia. As few as 3,000 are believed to remain in the wild. Commercial trade in these lizards is prohibited by the Convention on International Trade in Endangered Species.

“We are delighted to join with the Taronga Foundation to support their important wildlife conservation work,” said Mayor [Clover] Moore […] “[t]he Year of the Dragon is the perfect opportunity to get to know Taronga’s dragons, from the giant Komodo named Tuka, to the small eastern water dragons that roam wild in the zoo grounds – all of which are under pressure in the wild“

That’s right: Tuka. He’s one of the big attractions at Sydney’s popular Taronga Zoo, a 171-pound specimen who likes basking in the sun and probably eating you, if there were nothing else around. Eastern water dragons are great too, but they’re the opening act to the Komodos’ arena rock headliners (Komodos are thought to reach 300 pounds and 10 feet in length in the wild).

The Taronga Foundation, which helps fund conservation and education programs at the zoo, assists the Komodo Survival Program in Indonesia in helping local communities preserve the dragons in their natural habitat. They need the support: Komodo dragons are on the International Union for Conservation of Nature’s ‘Red List’ of threatened species.

I have a long story to tell about how Komodo dragons were the focal point of my childhood interest in wildlife (Varanus komodoensis was the first scientific name I ever memorized and one of the few I still remember), but it will have to wait for another time (maybe I can blog more about them after somebody pays for me to go on a $27,000 Komodo dragon getaway. Email my boss!) Right now, 20 years after Komodo dragons were hatched for the first time outside of Indonesia at the National Zoo, I’m just glad some groups are working to pull this amazing animal back from the brink of extinction. 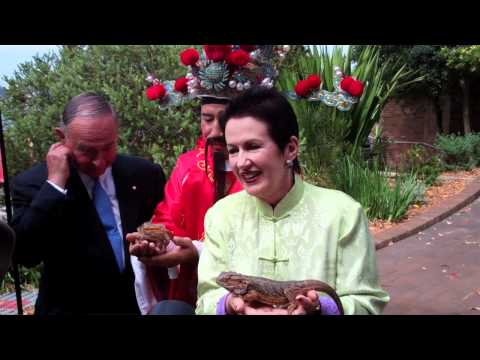