Power Shift is two months in the past, and I feel it’s a good time to reflect on what the event meant for students from my school, the College of Saint Benedict | Saint John’s University (CSB|SJU). On the whole, Power Shift was successful in many respects. It connected thousands of passionate and powerful young activists, turbocharged our momentum moving forward, and let ring the message that we have a vision for a clean and just future that we are determined to reach. This month, youth leaders across the country are launching projects to build the new economy hands on. It’s definitely worth a look.

It’s inspiring to see what has come out of Power Shift 2011, and today I want to remember what helped contribute to its success at the level of the college campus. As a NWF student fellow, I organized students at my school, the College of Saint Benedict|Saint John’s University (CSB|SJU) in central Minnesota, around Power Shift. We were successful in raising over $10,000 to send 43 students (13 of whom became facilitators for the movement-building training) to Washington, D.C., for the conference. Here are a few key lessons I learned from the experience.

Really, our work around Power Shift at CSB|SJU started back in September 2010 when we began organizing around sustainability projects on campus through our student Sustainability Alliance. The group is a collection of students with a shared interested in taking concrete actions to create and implement sensible economic, environmental and social initiatives on our campus and in the community. It is defined by students working together to turn their ideas into tangible campus projects (e.g. bottled water ban, recycling, Beyond Coal, administration-student communication) and grew rapidly as students had ownership and could see they were making a difference. When it came time to begin organizing around Power Shift, it was treated as another campus project.

Of course, leadership development is crucial to any cause. I found our model of a decentralized organization–focused more on student projects than the existence of the organization itself–to be especially effective. Our meetings and gatherings were open spaces where any student could bring forward ideas for initiatives and receive support and assistance from other students. I focused on ensuring new leaders had the necessary support to carry their projects forward, but left enough space that the outcome of the project depended on their effort. 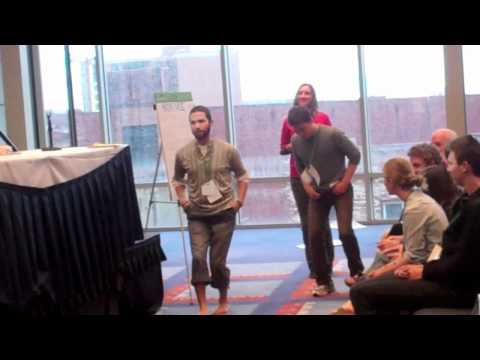 After identifying aspects of organizing in which students were either inexperienced or unfamiliar, we held a half-day retreat that featured trainings on those weak points. The retreat helped put everyone on the same page with regard to organizing, and gave students confidence. Part of its success was determining what to hold trainings on democratically, so students had a say in what skills they were improving.

When it came time to gear up for Power Shift, our protocol for organizing was pivotal. I introduced the idea of the conference to the Sustainability Alliance in December before winter break. In January, we created logistics, fundraising, recruitment, and coordinating committees that set about their particular tasks. Within a few weeks, we had over 40 students (from a campus of 3,500) registered for Power Shift, a bus to transport them on, and over $6,000 fundraised to reduce costs to under $100 per student for the weekend. Our recruitment was done almost entirely through word-of-mouth. With at least three people in each committee, and tasks reduced to simple steps, preparation Power Shift did not place a large burden on any one person.

It was a wonderful experience working with and meeting other people from my school simply to gear up around Power Shift. When the conference came, we arrived ready to lead and bring back what we learned. By making Power Shift itself another project in our campus organizing, we gained the momentum needed to continue our leadership development and push towards a cleaner, more sensible world.

﻿Casey Wojtalewicz is a recent graduate of Saint John’s University in Minnesota. As a NWF Campus Ecology Program fellow from fall 2010-spring 2011 and a key member of the College of Saint Benedict|Saint John’s University student Sustainability Alliance, Casey ran enormously successful EAC Power Vote and Power Shift campaigns on the CSB|SJU campuses. He is currently in the Netherlands finishing a human rights fellowship with Humanity in Action, after which he will move to Los Angeles for a six month apprenticeship field organizing with the Sierra Club’s Beyond Coal campaign.