UPDATE 11/10: In a major victory for the conservation movement, a decision on the pipeline will reportedly be delayed pending further review

It was only Sunday that I joined 12,000 activists encircling the White House to ask President Obama to block the proposed Keystone XL tar sands pipeline – but already, the landscape has changed. Not only is Reuters is reporting the State Department is considering revising the proposed route to go around ecologically sensitive areas, but a new investigation has been opened into the State Department’s review process:

The State Department’s inspector general has agreed to probe the agency’s review of the proposed Keystone XL oil sands pipeline, a process that project critics allege is biased in favor of developer TransCanada Corp.

The inspector general’s office disclosed the “special review” in a Friday memo to Deputy Secretary of State Bill Burns that was released by Sen. Bernie Sanders (I-Vt.). Sanders is one of more than a dozen lawmakers who called for the review.

“The primary objective of the review is to determine to what extent the Department and all other parties involved complied with federal laws and regulations relating to the Keystone XL pipeline permit process,” the memo states.

On top of the new investigation, TransCanada’s Keystone I pipeline was shut down after a power outage today. As the blog Michigan Messenger reports, “Despite assurances from TransCanada that the project would be environmentally safe, the first phase has leaked 14 times in the United States since it opened and at least that many times in Canada as well.” And now TransCanada expects us to stand aside and let it build Keystone I’s big brother?

I was proud to stand with Americans of all ages and backgrounds who’d come from all across the country to deliver our message at the White House on Sunday. We heard from organizers that there may have been enough of us there to circle the block several times. 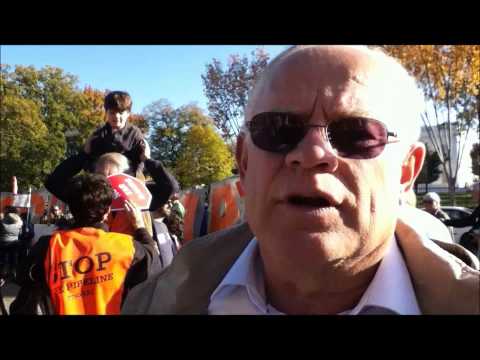 Learn more about why Keystone XL would be such a risky, bad deal at NWF.org/TarSands, then take a moment to ask President Obama to say no to dirty tar sands.