Elk in a field on the Charles Russell National Wildlife Refuge. Flickr photo by by Nathan Jongewaard.

September marks the time of year when lush river bottoms along the Missouri River in north-central Montana are transformed into their annual splendor. In the late afternoon hours on the Charles M. Russell National Wildlife Refuge (CMR), golden light hits the fall colors of the cottonwoods, redosier dogwood, willow and chokecherry, illuminating a unique palette of color that lasts only a few precious weeks.  In addition, hundreds of elk congregate along the fertile river-bottom in the Slippery Ann Elk Viewing Area—a cacophony of bugles and grunts fill the canyon walls into the twilight hours.  With the nearest major city hundreds of miles away, it’s no problem getting front row seats.

What is the Elk Rut?

The elk mating period, widely referred to as the “rut” is a spectacular opportunity to view large herds of male elk bulls aggressively pursuing female elk cows in a ritual courtship.  This annual courtship is photoperiodic, meaning that as the days become shorter in September elk take notice and the cows come into estrus. Large bull elk are on high alert and will often fight to secure a harem of more than 20 cows and spend significant time and energy fending off smaller, inferior bulls.  Since elk shed their antlers every year, the older bulls grow a larger set than the previous year—sometimes growing as fast as an inch per day during the summer and ultimately weighing more than 40 pounds. Using these massive antlers, the dominant bull is able to fend off the lesser competition and gain the opportunity to reproduce.

This video I had the honor to film through a spotting scope while at the CMR. 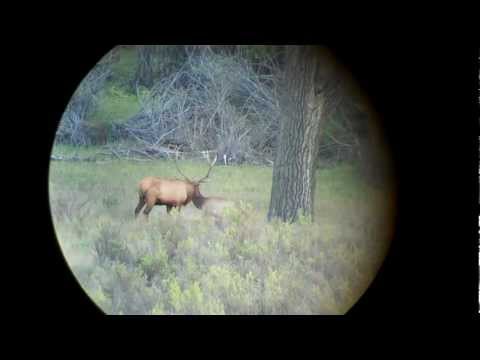 How to Get to the CMR

As the best places often are—traveling to the CMR is difficult and requires a certain degree of planning.  Although massive in size (1.1 million acres) this national wildlife refuge is extremely remote.  Most adventurous travelers drive through Billings, Montana and head north for about 150 miles to where the Missouri River crosses the landscape.  From there, one can follow signs to the refuge towards the east and roll down the windows to listen for bugling elk.  For more information on how to visit this spectacular refuge please contact fischerk@nwf.org.

NWF’s Work on the CMR

NWF has been intimately involved with wildlife and resource issues on the CMR for more than 25 years. Currently NWF is working collaboratively with landowners, agencies and sportsmen to restore a wild, free-roaming population of bison to the CMR. Show your support for wild landscapes like the CMR by sharing this exclusive footage with your family and friends and by learning more at NWF.org/RestoringBison.

Written by Kit Fischer
RecentPopular
Get Outside, People and Wildlife