This post was written by Zoe Lipman, Senior Analyst of Climate and Energy Policy for National Wildlife Federation.

Yesterday on the lawn of the DC Historical Society, the Xprize foundation awarded $10 million in prizes to three teams who built vehicles that achieve greater than 100 MPGe (Miles Per Gallon energy equivalent – an efficiency measure equalized across electric, gas, or other fuels) while being speedy, safe, affordable and mass producible.

Over 100 teams entered the contest, 22 super-efficient vehicles made the finals, and 3 teams split the prize money by pushing the envelope in materials, safety, propulsion and design. Two of the winning vehicles achieved nearly 200 MPGe.

National Wildlife Federation is a sponsor of the Automotive Xprize which aims to galvanize technology breakthroughs that can transform the auto industry while cutting oil consumption and emissions. The prizes for these novel super-efficient vehicles come just months before very efficient mass market electric vehicles are slated to hit vehicle showrooms and family’s garages this fall.

Speakers from the winning teams, prominent legislators and others underscored how a confluence of initiatives like the Xprize which inspire innovation and entrepreneurship, energy policy leadership from government, and robust public and private sector partnerships to invest in science, technology and manufacturing – are the critical ingredients for US technology leadership and economic revitalization. Noting that “imported oil is responsible for 50% of the US trade deficit” speakers stressed the need to act to adopt more efficient vehicles to address climate change, energy independence and the economy.

A member of the winning Edison2 Team of Lynchburg, Virginia, spoke of “electricity in the country” around automotive innovation that must continue. Speakers stressed the importance of science education and building the next generation of engineers. The West Philly Hybrid X team – students from the West Philadelphia High School Academy of Automotive and Mechanical Engineering epitomized this emphasis with their two entries, battery electric and plug-in-electric conversion vehicles which achieved 57 and 64MPGe respectively (standard MPG for these vehicles would be even higher).

This optimism is shared by the public. A poll released separately yesterday showed overwhelming support for stronger national fuel economy standards. 86% of respondents believed that the technology exists today to meet a 60mpg standard by 2025 or could be developed “if we made a serious effort”. The Xprize winners and runners up are one more piece of evidence that the US can meet this challenge handily. 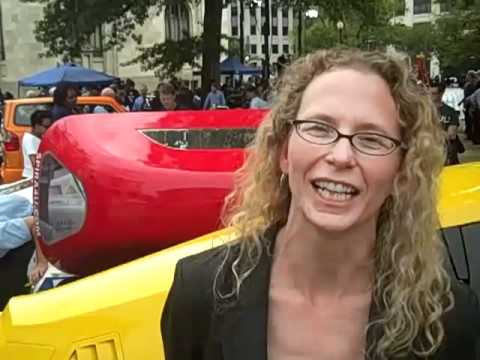