A fourth generation angler, Brenda recalls one particular day she spent on Burt Lake with her grandpa when she was six. It was cold outside, but the ice-fishing shanty was warm and spending the day with her grandpa was made that much better by having taken the day off of school.

She and her grandpa heard a commotion at a nearby fishing shanty and ventured over to find a huge lake sturgeon on the ice. Looking into its eyes, she was awed by the huge prehistoric fish. Years later, she is still struck by the shared excitement of the anglers.

Now, Brenda honors her grandfather’s memory by making sure that ice-fishing can continue. As a farmer in Southeast Michigan, he worked from sunup to sundown–except for the one month each year he would spend ice fishing on Northern Michigan’s frozen lakes.

Brenda works with the National Wildlife Federation mobilizing Michiganders take action to protect northern lakes and wildlife from the impacts of climate change. She engages conservationists, hunters, anglers, youth groups and others to speak up for the future of wildlife and our conservation heritage.

Earlier this week, I spent a day with Brenda in Detroit at an Environmental Protection Agency public hearing, where she was voicing her support for cutting climate pollution from cars. The hearing was packed with people speaking in favor of proposed fuel efficiency standards that will cut the amount of gas used by cars, and reduce the carbon pollution in the U.S. by 10%.

Watch Brenda make the case for wildlife to the EPA: 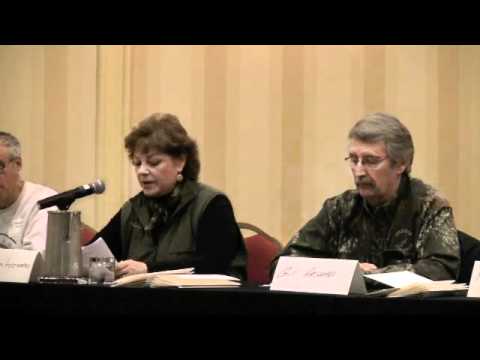